The story of an endangered historic coastal property

On the California coast, it’s not unusual for new development to push out the old. But in Ventura, activists, including the San Buenaventura Conservancy, are working hard to save the long abandoned historic home of one of the city’s earliest and most influential residents, E.P. Foster, who was only 4 years old in 1852 when his family migrated West by covered wagon.

The Ventura County Reporter featured a story on Sept. 3 about the old house and seven-acre property, which Foster and his wife purchased for $226 in 1879. The Fosters, who had 10 children, built the Folk Victorian farmhouse in 1881 at 2717 North Ventura Ave., according to the Westside Community Council Web site. The home was remodeled and added onto in the Federal Colonial Revival style in the late 1930s, after E.P. and Orpha Foster had both passed away; by then the property featured the main house, a carriage house and an outbuilding. 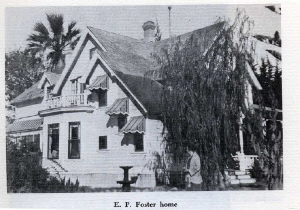 The home’s original wood shingles, trim and ornate multi-paned style windows and doors remain, although the home itself has fallen into terrible disrepair as a result of decades of neglect.

Passed down to Foster family heirs and then donated to the school district, unfortunately none of the property’s owners has had the money to maintain -– let alone restore — the home or other buildings.

The Ventura County Assessor’s Office does not show a listing for the given home address, and I wasn’t able to determine the property’s estimated value. Zillow.com lists the median sales price for homes in Ventura at $405,000, a marked drop from a high of about $600,000 in mid-2005.

The hope is to eventually restore the home to its 1920s condition and use it was a historical and cultural center, which is something the Foster family would no doubt endorse.

E.P. was the first chairman of California’s state forestry commission and he helped establish Ventura’s park system. Orpha was a teacher and a community leader, who served as president of the Ventura County Federation of Women’s Clubs, a board member for the Ventura School for Girls and vice president for the Big Sisters League Hospital (subsequently named Foster Memorial Hospital).

The Fosters’ great-grandson Phil Ranger has joined the effort to put the property to educational use – and save a piece of the area’s history. He teamed up with historic preservation activist Sarah Kalvin to form the Foster Legacy Foundation. The foundation is in negotiations to buy the property.

As part of that effort, Sept. 5, is officially E.P. Foster Day in Ventura. And on Sept. 19, Kalvin has invited plein air artists and photographers to the Foster House as part of an ongoing project to document the house through art.

Let’s hope they’re able to preserve the Fosters’ legacy of education and philanthropy.