There goes the neighborhood: When paradise becomes a parking lot

“You don’t know what you got till it’s gone. They paved paradise and put up a parking lot.” — Joni Mitchell, Big Yellow Taxi.

Okay, so it’s not exactly paving paradise per se, but a developer in Sioux Falls, S.D. is planning to demolish a 129-year-old gothic-style mansion in the city’s cathedral district to make way for a used car lot, according to a story reported on KELO TV. 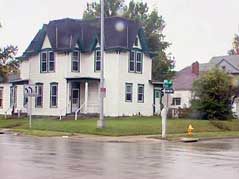 This gothic mansion in Sioux Falls, S.D., is slated to be torn down to make way for a used car sales lot. Photo courtesy of KELO TV.

The home was built in 1888 for William T. Doolittle, one of the city’s early mayors, an engineer on the first train to the city — and a close friend to R.F. Pettigrew, one of the city’s founding fathers. Siouxland Heritage Museum Kevin Gansz told the TV station that the home is considered historically significant and is now a stop on the Siouxland Heritage Museum’s summer walking tours.

It seems ludicrous that a wonderful old house, with such a rich history, is considered disposable — even in a place like Sioux Falls, where real estate prices have got to be more modest than more densely populated cities. But every day it seems old houses everywhere are getting torn down because they’re too run down, it would cost too much to renovate them or the land they sit on is considered too valuable and could be put to use in more lucrative ways.

It’s true that being a homeowner involves a lot of work and money. There’s always something that needs to be done to keep your home in top condition, whether it be painting, replacing roofing or siding, or keeping systems and appliances in working order. But, in my mind, it’s work that’s got to be done if we care about preserving the character of our communities and the resources of the planet.

We’ve got to take care of what we’ve got. Perhaps this old house will be dissembled and its parts will be reused. I hope so. But what character will a used car lot add to a historical district in Sioux Falls? I’m not against capitalism. What I’m against is short-sighted capitalism. In this case, I wonder what happens after the car lot goes in. Will another old house be torn down so that competing car lot or a gas station can go in?

Sure, it’s one old house, but I’ve got to wonder: How will tearing it down will affect the surrounding neighborhood and the wider community as a whole? As Joni Mitchell sang, you really don’t know what you have until it’s gone.