For centuries men have grunted “Fire. Good.” We are the only species on Earth that burns things. It’s been a wonderful evolutionary advantage. How could we possibly cook without fire?

But it may finally be time to prove Prometheus wrong, extinguish the flames in the kitchen and throw away the carbon monoxide detectors.

The hottest new trend in kitchen appliances is fire-free: induction cooktop. Induction cooking is safer, faster, more efficient, more powerful and flexible than either gas or conventional electric cooktops. And if you have solar panels like me, the fuel to power it is free! It also improves the indoor air quaility by eliminating carbon monoxide that comes with gas stoves.

Check out my VIDEO TOUR of a high-end kitchen that uses induction cooking. 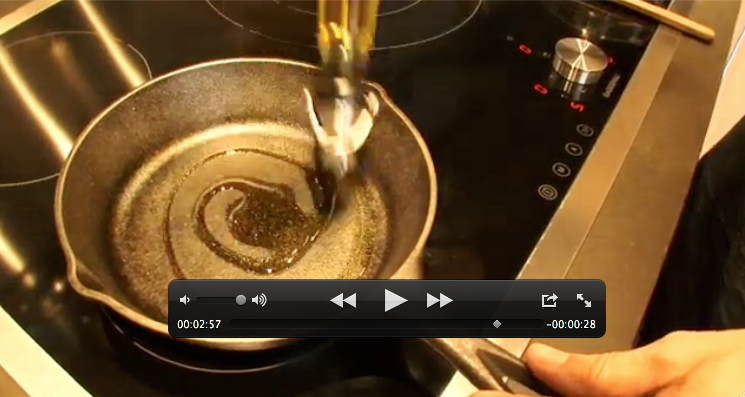 Induction cooking is the fastest cooking available - bar none. It beats even commercial gas stoves. An induction cooktop boils a 1.5 gallon pot of water within 8 minutes, compared to 12 minutes for a radiant electric and almost 14 minutes for a gas cooktop.

It is even more flexible and variable than gas. You not only get higher temperatures and faster cooking, but also lower and more controllable temps than with gas. You can melt chocolate without a double boiler. An induction can be taken from extreme boil to a barely perceivable simmer very quickly. Gas is simply more difficult to control. Many restaurant chefs are switching to induction cooking for this reason.

Induction stoves come in great retro designs from every era. Sadly, this induction retro model is available everywhere except the U.S.

Magnetic induction cooking is extremely efficient so it will use far less energy than gas or conventional electric. Induction is 84% efficient while conventional electric is 73% and gas is a pathetic energy demon at 40%. 60% of the energy used for a gas stove is waste heat. With a gas stove your a/c in the summer will work over time to remove that insane amount of gas stovetop heat. With induction, cooking in summer is a dream. There is much, much less waste heat (almost none), so you get a much cooler kitchen.

Gas can cause sever burns, fires, death by carbon monoxide poisoning or even explode . . . other than that it’s a lovely way to cook (your home is not likely to explode - but just Google images for houses that have exploded by gas to know that it’s frighteningly possible). Electric radiant cooktop surfaces are very hot around the pot and stay hot for several minutes after turning them off.

On the other hand, induction cooking surfaces are made from a glass-ceramic material that is a poor heat conductor. The magnetic coil beneath it induces a current directly into the cookware. So, the cookware gets hot, but the stove does not. In fact, you can place a paper towel under a pot of boiling water and it will not catch fire. This should come as great comfort to anyone with small children or to klutzy chefs.

The best safety feature of induction is that they do not emit any heat on their own. Induction cookers have no exposed coil, open flame or heated surface. If an element is turned on accidentally, no heat is generated unless iron content (stainless steel) cookware is placed on the element. When cookware is removed from the element, the coil automatically turns off within 30 seconds and the surrounding glass does not get searingly hot like with other cooktops. 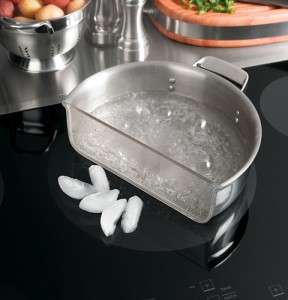 Induction cooktops heat only the pan and not the surrounding stove. Ice cubes don't melt on cooktop even while water boils in the pan.

If you clicked that Google image link above then this section already makes sense. By eliminating gas from your home you may be eligible for a reduction in your home insurance. Leave a dish towel on a gas stove and bye-bye new kitchen. On induction cooktop you could put that towel under a pot of boiling water without worry of fire.

Powered by the sun:

As I said, one of the great benefits of cooking with electric induction is they are wonderfully efficient and can be powered with any kind of renewable energy. Solar is trending in the U.S. so if you’re upgrading your kitchen, be prepared to catch the solar wave and go all-electric. It’s simply cheaper, cleaner and safer to cook with energy from the sun.

Hands down induction is the easiest of all cooktops to clean. Gas is just awful in this area. The funky grills traps and bake on all kinds of nasty stuff that is impossible to remove. Electric radiant cooktops are often made with a slick glass surface. They are easier to clean than gas, but they stay hot for so long and they bake on the grease and other gunk that makes them tough to remove.

Induction surfaces have a glass surface that stays cool and is easy to clean - spillovers don’t cook into the surface. Check out this YouTube video of one creative way to keep an induction stove clean by putting a dish towel under the pan of sizzling bacon

There is one caveat with induction cooking. You must use cookware that has iron content, such as stainless steel, that is magnetic. If a magnet sticks to the bottom of your pan, you can use it. Aluminum, copper and ceramic will not work (note: aluminum core is fine if the exterior is a magnetic material). But, cast iron, magnetic stainless steel and iron-core coated enamel.

I’ve heard people say that you need “special” induction cookware. That’s not really accurate. Different cookware is used for different methods of cooking. For induction, it is simple - if a magnet sticks to it - you can use it. Cookware that works on an induction stove is no more or less expensive than any other kind.

Matt Grocoff, Esq. LEED-GA has been honored with the 2012 Michigan Green Leader Award and is founder of Thrive - Net Zero Energy Consulting Collaborative, host of Greenovation.TV, a contributor to The Environment Report on Public Radio, the green renovation expert for Old House Web, and a sought after lecturer. His home is America’s oldest net-zero energy home and was called “Sustainable Perfection” by The Atlantic, and honored as one of USA Today’s seven “Best Green Homes of 2010? and Preservation Project of the Year. He drives a Chevy Volt powered by the sunshine that hits his roof. Join him on Google+, Twitter, Facebook , and GreenovationTV