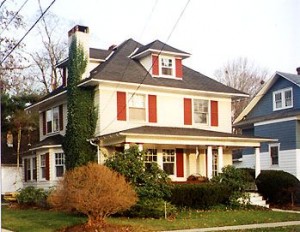 I wrote about lovers of Victorian Era houses in a blog the other week. Could they possibly be surpassed in their passion for restoring their old houses? I think I’ve found another group of enthusiasts who might give them a run for their money. They champion a style which ironically became popular in opposition to Victorian Era architectural frills–American Arts and Crafts.

The American Arts and Crafts Movement

I grew up near Pittsburgh, PA, where a lot of small towns had quite a few American Arts and Crafts Movement homes, especially American Four Square and Craftsman styles. The old house my grandparents lived in was a big square dwelling with four large rooms on the main floor, four large bedrooms and a big bathroom on the second level, and a big walk-up attic that could easily have been finished into two more bedrooms. Their street was lined on both sides with old houses of that type. When I got into home building, I realized they were all American Four Squares.

A gentleman who bought a 1918 Craftsman in Pittsburgh has a Web site featuring not only the old house restoration, but all things American Arts and Crafts including American Four Square, Craftsman, Prairie Style, and Bungalow style homes. He even has a section on regional differences and a whole page of photos of old houses in Pittsburgh–good examples of the American Arts and Crafts styles, including one of his next door neighbor’s Prairie-style home.

Regardless of which style you favor, his site recommends attending a festival for all old house lovers held every June in Toledo, Ohio. The Toledo Old West End Festival celebrates old houses and their many architectural styles. It boasts of having “one of the country’s largest collections of late Victorian homes still standing.” The old houses on display take up over twenty-five city blocks. It sounds like every style of old house is well-represented, including those comprising the American Arts and Crafts Movement. This year the festival is June 5th and 6th.