I came up in the trades using the circular saw that the carpenters who hired me used: 7 1/4 inch sidewinders. 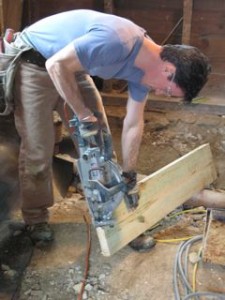 When I opened my own home improvement company, nothing changed, at least tool-wise. I bought sidewinders.

However, nothing brings so clearly to mind the phrase “time is money” as being the company owner–and since it was a company of one (plenty of room to grow), I was also the lead carpenter, lumber mover, accountant and head of janitorial. So the work habits I had working on somebody else’s dime quickly changed. If there was a second here or minute there I could save, I did. And the first place I started saving big chunks of time on framing projects was doing away with saw horses, at least for cutting framing.

Instead of horses, I cut lumber off the stack. I’d slide a piece out, turn it on its edge, crane my neck over my blade-right saw and “drop” the tool through the work. It saved all kinds of time on decks, additions, basements, you name it, because I was handling the material fewer times. I’d simply deliver it to the location it needed to go and cut there, rather than stacking it, then moving individual pieces to horses as my previous employers did. Sure cutting is easier on horses with a sidewinder, but slower.

Turns out I was doing what production framers–notably Western style framers–had been doing forever. They not only cut off the stack, they cut from their feet when there was no stack. Forget picking up a board and moving it–waste of time!–they simply hooked it with their foot a few inches off the floor and dropped the saw right through. Easy, fast and accurate. (Also, not in the instruction manual and not a recommended practice. This is simple reporting that it happens.)

One difference, was the saw. They use worm-drives for this. Front-heavy–heck, just plain heavy–in-line, blade-LEFT saws. Fifteen-ish pounds of tool plowing through a 2×10 is sweet for a carpenter in a hurry. And because the blade is on the left side of the tool–ideal for right-handers–you can see what you’re doing. So I made the break to worm drives.

And because I use a wormdrive so much, when I find one that rocks the house, I get all Type A. Or, considering that Bosch’s 1677MD is one of those house rockin’ saws, I should probably say Type B (for Bosch.)

The 1677MD has handled everything I’ve thrown at it from frame to finish. It’s got uber power for plowing through everything from spf studs and headers to 2 x 10 pressure treated southern pine deck joists. I’ve gang-cut deck boards, clipped 4×4 fence posts to height, made cross cuts, angle cuts, bevel cuts. The saw has the power and proper adjustments necessary to keep me on the move.

On the finish end of things, the in-line/heavyweight design shines. Surprisingly maybe even more than framing. Because the tool is so massive (it’s actually on the lighter end of the spectrum for the category) it runs smoothly when used with a straight-edge trimming doors or cutting shelf blanks. Smooth is good. And because the tool body is in-line it passes by the clamps that hold the straight edge down. Plush.

Rugged features like the magnesium housing, rafter hook (which I use to hang the saw on the wall when I’m not using it during small-room remodels like bathrooms), and finer details like Bosch’s DirectConnect no-cord system make using the tool efficient and productive. Lines of site to the blade and cut line are clear and easy to see, whether I’m following the marks on the shoe or watching the blade hit the pencil line. The trigger is easy to engage, the handle size fits my hand, and the guard rarely (if ever) hangs up. I’ve dropped this tool on the ground a million times and it still cuts square.

And all that saves me the cherished minute–several times a day–making the Bosch 1677MD welcome on my job sites.