Call me old-fashioned, but I like my pneumatic tools. And while I wish I could ditch the hose sometimes, the tools’ practically failure-free and no-futz performance is hard to ignore. What I haven’t had as much good luck with, however, is the compressor that provides the air. 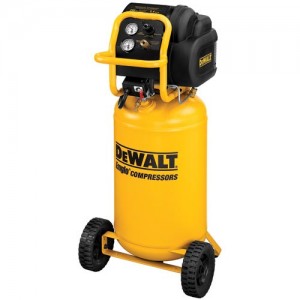 I’ve used twin-stacks for most of my career and they provide most of the air and dependability I need, but older ones have a wicked “draw” (which means they pop breakers often trying to get started). As far as new ones go, working in the same room with them is kind of like an earthquake in a bottle: when they run–which is often–the floor shakes, the noise is wrenching, and carrying them–or moving them out of the way–is an exercise in frustration.

In fact, I got so tired of the whole situation I stole an concept from a friend of mine and got a monster, 25 gallon compressor. I stationed it in the basement and ran hoses from it to wherever the work was. This worked nicely, but the compressor was such a boat anchor that moving it from shop to job site was worse than the twin-stacks. Then it died.

That’s about the time I got my hands on the DeWalt D55168. This unit combines the positives of both small, mobile compressors and the air capacity and smooth-running of larger units. From shop to job site, this unit performs.

At 200 PSI, the unit stores a load of air–plenty for two carpenters framing a deck or building a fence for example. And at 15 gallons has enough reserve air to keep up with nailing off a plywood deck which I did on a recent roof remodel. The unit runs, but it keeps up–and doesn’t leave nails proud as a smaller, lower-pressure unit would. I like this air in the shop too; because there’s so much air stored high pressure the unit barely runs when I’m doing a woodworking project. I sometimes forget its there. Ditto on trim jobs.

The 1.8 horsepower electric motor is positioned on the top of the vertical tank. It runs quietly by compressor standards (78dBA) and starts with a lower draw it seems than other units I’ve owned do (I can tell based on the number of breakers I haven’t tripped using it). The vertical orientation also means that it is more mobile than it appears. Sure, it rolls on wheels, but I can also lift it fairy easily by both ends and carry it. It’s easier with two people and I wish there were a few carry handles but it’s just as easy, in my mind, as carrying a twin-stack. Further, its easy to tuck into the trailer or lay flat in the truck bed. And, I don’t bring it into a house with me on a job site. I station it outdoors somewhere and run hoses to the work location. Much easier.

And that’s the point. You want tools that make life easy rather than add challenges. Old houses provide enough of that as it is.