A good table saw is essential equipment for getting well-crafted results, keyed in details, and for cutting critical elements required for dialed-in, looks-like-it-grew-there kind of work. And a table saw that is abundantly up to the task is DeWalt’s DW744 10 inch job site table saw. Outstanding design and smart features make this a class leader. 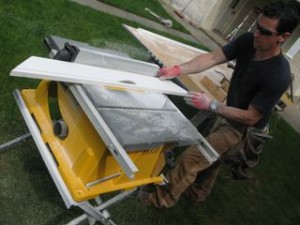 I used the tool on several job sites cutting everything from PVC to Western Red Cedar to Southern Pine and SPF. It performed admirably in all materials.

Fence. The first thing I notice about the 744 is the rack and pinion style fence–a feature pretty much unique to DeWalt and one that is great. Instead of siding on rails, the fence rolls on gears–front and back–which makes adjusting it to a setting easy, plush, accurate and (and this is my favorite) dead parallel to the blade. If you’ve wrestled, jiggled, bumped and otherwise been frustrated by less tuned-in fences this will be refreshing.

Deck. The deck is appropriately sized to what I cut on a job site table saw. In other words, it’s small. I don’t–nor will I ever–try and rip a sheet of plywood or MDF on a job site table saw. They never were designed for it and still aren’t. The problem isn’t the power or cut capacity, it’s balance. Unless you have the thing built into a giant table or bolted to the ground, ripping sheet goods will be an exercise in “what’s going to tip and fall first? The saw, the cut-off, or me trying to keep the other two from happening?” To put a final nail in it: table saws are primarily designed to rip planks and boards. Period.

Power. OK, so now that we’re ripping planks, the motor on the DW744 starts plush–not too fast, not too slow–the motor noise isn’t shrieking (nice) and it has the go-juice to plow through 3 inches of solid cedar 4-by without a hiccup (using a new blade.) The switch is also easy to reach for on/off and works like a champ. It also delivered clean, smooth cuts in PVC 1-by.

Blade Change. DeWalt did something smart and simple here. They made the saw’s throat a little wider so that you can reach into and wrench off the blade nut and still have room to move your fingers a little. It’s not enormous, but it is bigger than any other saw I’ve used in recent memory. Thank you! I actually avoid changing table saw blades because it’s such a headache. I’ll still avoid it, but less so now. The wrenches are easy to find and store along with an extra blade or ten on the side of the tool.

Mobility and Stability. Because the saw deck is small, the saw is somewhere between a little and a LOT easier to move than other saws I’ve worked with. No massive wheel kit makes it easier to get up stairs, in the truck, etc. And it makes it a lot lighter. DeWalt even milled rounded over grips on the under-side of the deck to make it more comfortable to move. Nice.

Instead of a giant wheel kit, DeWalt employs a simple folding stand. It works, however it is a little finicky. Because the tool only connects to the stand on one side with two small tabs, it’s hard to move the saw across the room or just to adjust its position (you lift the saw and leave the stand…or just drag some of it with you.) The feet bottoms are hard plastic and get gouged up (like if you set up on a driveway or sidewalk.) No big deal on a rough carpentry site, but I’m a little worried about setting it up in a inside a finished house and gouging the floor. Still the stand works better than sawhorses, packs away easily and makes using the saw more efficient, so even though I have a few issues I still use it every time I set the saw up. It’s simple and it works.

Push Stick. Using a push stick with a table saw is about the smartest thing you can do. However, people often skip this safety element because, well, where did the push stick go? It’s forever on the ground, fell out of your tool pouch or is otherwise out of reach. DeWalt has–simply and smartly–solved this problem by installing a push stick holder on the side of the fence. The stick slides in and out easily and is–or at least should be–there when you need it to improve your safety while you improve homes.