When it comes to the blunt-force trauma of demolition–often the first phase in old house remodeling–I reach for brutal, smartly designed tools. In my mind, the best way to approach demo is to be smart and tough. 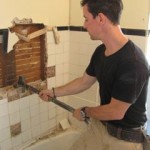 That blend of sense and sinew is important to me because, despite what I’ve seen on far too many TV shows, a big ole dumb sledgehammer has virtually no place on any residential demo job you want to finish (1) in your lifetime or (2) without creating a whole host of other problems by bashing away like a banshee.

I’ve learned in dust-cloud after truckload after pile of plaster, lath, and every other kind of building material that the worst way to take it down is to smash it.

On the other hand, the best way to demo old claddings is in the reverse direction of the way they were installed. So in the case of plaster and lath or a T&G Douglas fir porch ceiling (rotted from roof leaks of course) the best way to get rid of them is to pull them apart. This requires what I call a “pierce and pry” approach which depends heavily on tools designed to do it.

This 30 inch bar is designed with demo in mind. In addition to the above-mentioned, I’ve also ripped out cast iron tubs, wall tile, door jambs and trim.

The first thing I like about the bar is its duck-bill head. It’s a natural born piercing machine enabling me to punch through and get behind everything from trim boards to flooring to plaster.. For the fir ceiling I cut a hole first with a recip saw to get started. Once back there the jaw is sized just right that I can pull it back or pry materials with a reasonable amount of force. A bigger jaw would mean I’d have to pull harder and pop more nails at a single time. Smaller bites takes less effort and I can move faster–and all day. The duck-bill is too blunt for small items like shoe molding and crown, for which I use a smaller bar. No problem there.

At 8.5 pounds it’s heavy enough to exert force on a cladding, but light enough that I can (1) get it moving yanking out material and (2) and not require back surgery after hauling it around all day. For those rare times when I can get behind or on top of something (say I have access to the attic above a ceiling or I’m stripping both sides of a partition wall) the tool head has enough size and mass that I can punch the cladding off from behind.

And, the tool has a hammer-head–but its only an element, not the whole tool. Because despite what I said before, there is one place where a sledge can come in handy: removing cast iron tubs. Because the house is often literally built around them (not to mention their mind-bending weight) sometimes the best–and only–way to get them out is in pieces. Cast iron is brittle which means you can break it (safety glasses a must here). And let me tell you, you can break a tub with this tool. Be wary of what I call the “halo effect” though where you shake plaster loose or knock pictures off the wall in other rooms.

For stuff you really have to lean on the tool for–prying apart old framing or stubborn flooring for example–the bar itself is oval shaped. Unlike basic octagonal bars I’ve used in the past–and bent–you’ll have to hook FUBAR up to your trailer hitch to bend it out of shape. That’s what I call smart and tough.