Wormdrive saws, historically, are a West Coast phenomenon. Long, heavy, and all muscle, they were originally marketed and sold West of the Mississippi River while the lighter, more compact sidewinder circular saws were sold East of the Mississip. 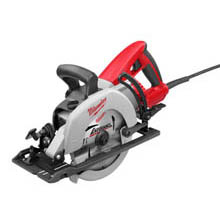 But, to reduce one of the greatest economic forces since supply and demand was invented (globalization) to a bad one-liner, we live in a global world. And that means the river doesn’t have to do with much supply-wise any more and East Coasters have wormdrives on the shelves. And while it took me a long time to even think about picking one up, I’m a convert. I like everything from line-of-site to the cut (the blade is on the left where it should be for a right handed user) to the smooth solid feel when trimming a door, so when I see a wormdrive come along I like to get it cookin’ at MyFixitUpLife HQ and see what we’ve got, which is what I did with Milwuakee’s 6477-20 7 1/4 inch wormdrive.

First thing I noticed is that it is a solidly built and nicely detailed tool. The adjustment levers are big and easy to move. The saw moves easily to adjust and the levers lock back down no fuss no muss.

Next, I noticed the composite shoe–which is something I really dig on a circ saw. I tend to be somewhat rough on them sending them to the ground in a hurry (not dropping or throwing them…that’s by accident and happens too) because I like to move like I mean it when framing. Stamped steel shoes bend easily in my experience while composites tend to last and shed a few ounces of unnecessary weight.

The overmolded handle is nice and beefy. It is a little large for my hands (which are on the small end of the spectrum, no demerits to Milwaukee) but I could reach and pull the trigger in all kinds of different work. The auxiliary handle is also nice, easy to reach and hang on to (which I use more, ironically I think, for trim jobs where I need to keep the saw very steady, like using a straight edge to cut a shelf blank or trim a door.)

The guard didn’t hang up on anything, which enabled me to get at the work and see how much power this thing dished out, which was ample. Nothing I threw at it slowed it down. And when I did put it down, there was a rafter hook which I like for hanging the tool on a nail in the wall (a smart idea for storing tools in a cramped interior remodeling job.)

The markings on the shoe are easy to see and if you’re the kind of carpenter that uses the markings on the shoe to follow then line, you don’t have much to worry about. If you like to see the blade hit the line (I do) on the other hand, the line is really hard to see. There is only about 3/8 inch between the blade and the shoe which almost entirely covers the line. I think this is an important detail and wish the opening made the line easier to see.

All in all a good saw that’ll deliver the goods from frame to finish.