Turn that historic water tower into a home

According to some people, old churches are now the number one choice for building conversions by families who want to save historic structures and live in “something different.” That surprises me, as I always thought old barns would head up the list. But perhaps they’ve been overtaken by churches, or else, someone just said that to make a church-to-home conversion listing sound more attractive — as difficult as that may be to believe. 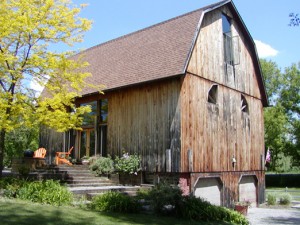 Convert an old barn into your new home -- photo from georgebakerarchitects.com

My fascination with home conversions began many years ago, before I ever considered a career in construction. I recall leafing through a magazine and coming upon an article about a barn that had been converted into a New England home. The barn conversion exemplified everything I thought a home should be back in those days, and my beliefs haven’t changed that much all these years later. I can still remember as if the magazine was in front of me the rustic wood siding, the standing seam metal roof, and the heavy rough-hewn beams that crossed the home above the main living area.

Evidently my taste in homes isn’t all that rare as quite a few people actually do take the plunge and turn old barns into their homes. A 200-year old barn/home conversion in Maine isn’t exactly like the pictures I recall from the magazine, but pretty darn close – the before and after photos are amazing. If your tastes aren’t as rustic as mine, you might find a conversion in the Netherlands a little more attractive. Actually, in that conversion the barn was taken down and replaced by new construction that joined the old farmhouse and its surrounding sheds and outbuildings. It’s a little too modern for my tastes — I prefer my barn/home conversions to retain more of the character and charm of the old barn. What do you think? 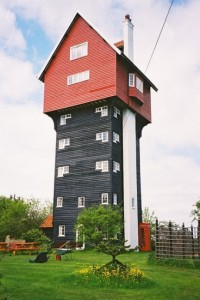 If you’re not afraid of heights, you might be interested in what appears to be a new trend in unusual old building/home conversions — living in a water tower. The trend appears to be more prevalent in Europe at the moment, but this country definitely has an abundance of old water towers that might be suitable for conversions. I really like the tower in Suffolk, England that was actually disguised as a house not that long after being built in 1923. Years later it became a bed and breakfast and is known as the “House in the Clouds.”

You might be wondering if water tower living is right for you, and if that’s the case, rent a Huntington Beach, California tower for a week and see what you think. The tower was originally built in 1830, the views are said to be spectacular, and it offers the ultimate in private sunbathing.

If you could see yourself living in a converted water tower and want to pursue it further, my only advice is make sure your budget includes an elevator — or expect to soon be in the best cardiovascular shape of your life.