During a leisurely drive through Kentucky and Tennessee, you will often come across old signs that were painted many years ago in the most unlikely of places. There are massive signs painted on the sides and tops of barns, so they can be viewed like billboards by drivers passing on the nearby roads. There are painted signs on houses, trees, bridges, rocks and even on classic vehicles that have been strategically placed near the roadside. They advertise everything from amusements to be seen down the road or things to be sold, such as RC Cola or Moon Pies. 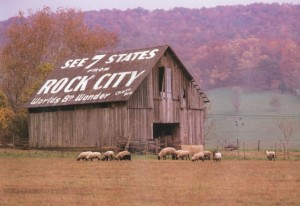 Those painted signs, especially those that scream “See Rock City!” in big white letters on a black background, have become an iconic part of the Americana. Now I notice painted signs everywhere, even in downtown areas where the sides of large factories were used to direct out-of-towners to the best diners or attractions in town. They are often weathered and obviously out of date, but kept in place as a charming part of history.

But a small town in San Francisco is one example of what happens when vintage signs and other memorabilia attached to buildings meets the zoning laws that say certain things aren’t supposed to be in certain places. In this case, a Coca-Cola sign painted on the side of a grocery store in the 1940s has now become a hot spot of indignation for those who feel it needs to be removed.

The old grocery store was turned into a home some years ago, and the sign was covered by siding. When the current owner had the old asbestos siding removed, he found the vintage sign. Protected from the elements all those years, it needed only a small touch-up of paint to look good as new.

The problem? The old grocery store is now a home in a residential area, and no corporate advertising is allowed. 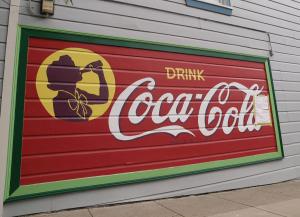 In most cases, towns try to protect the things that showcase their history. From old houses that need renovation to architectural details of streetlights and benches, many towns fiercely protect the marks of heritage. But in this case, even an innocent icon of history like a Coca-Cola sign bumps up against the more modern laws, and that leads to murky waters.

In the end, the sign was saved by neighbors who looked into the detailed history of the sign, and by town supervisor David Campos, who listened to those who wanted to keep the history in place. The story made me wonder about the old barns and houses I have seen slowly disappearing or covering over their signs in the heart of Kentucky and Tennessee. Is it because the new owners don’t like the old signs? Or is it because zoning laws and regulations are phasing out the old pieces of history to make for a more modern look?

Here’s to hoping that new zoning laws are created in such a way that old signs and other historic memorabilia attached to houses can be allowed to stay in place and seen as a part of history, not as a flouncing of the new rules. The argument over the Coca-Cola sign is one that many city planners could take to heart and use as the basis of preservation laws before they face their own issues with what is history and what is not.