Want that historic house? Move it!

I grew up on a farm. In the hills of Kentucky, it isn’t unusual to see an abandoned house or old barn that is slowly giving way to the elements. Right next to our farm sat an old house that had been the home of an elderly woman for many years. After the passed away, her children didn’t bother with the house–and it began the slow and sad decline that meant soon, it would fall into a pile of rubble.

I remember walking by the house and wishing I could somehow take it apart, piece by piece, and carry it back to my farm, where I would reassemble it and use it as my very own playhouse. I look back on those musings now and see it as the start of my love of old houses and my desire to save each one, no matter how insignificant they might seem in the grand scheme of things. 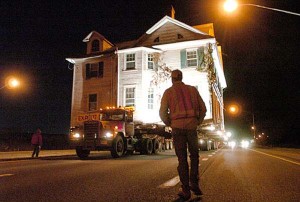 Today, I am utterly fascinated when I read stories of old houses being moved from one location to another. It happens more often than you might think. A homeowner might decide they no longer want a particular structure, but they do want to keep the land it sits on. Rather than demolish the house, they offer it for sale for the token price of one dollar, with the stipulation that the buyer move the house from the property within a set period of time.

Sounds like a good deal, right? That’s until you get into the cost and cumbersome process of moving an entire house!

Moving a home can be done in one of two ways. First, you can move the house by taking it apart, board by board and nail by nail, then reassembling it elsewhere. This method can prove to take a very long time. Or you can hire a professional mover who is experienced with hauling large houses across short distances. This certainly takes less time. With each option there is always the possibility of damage to the old house, especially to delicate areas, such as plaster on the walls.

What does it cost to move a house? Popular Mechanics suggests between $12 and $16 per square foot, but that cost can vary depending upon how far the house will be moved and the difficulty of getting it out of one lot and onto another. There are also practical and expensive considerations: power lines and traffic lights might need to be disconnected and moved. Trees might have to be cut down. When the house does get to the final destination, there must be all the trappings of a house that was built there in the first place, including electricity, plumbing and a sturdy foundation.

Despite the prohibitive cost, there is a kind of magic in moving an entire house. Seeing a home rise from its foundation on the back of a flatbed truck is always an impressive sight. Every time I see a new story about another house being moved, I am entranced by the photographs.

The old house that sat next to our farm has fallen into a pile of rubble. That rubble is now covered in kudzu vines. But I can assure you that if the house were still there, I would definitely consider having it moved to my own property–it would not only be a chance to save a tiny bit of history, but an opportunity to see one of those big house-moving trucks in action.

If you want to learn more, here’s a great blog about a home that was moved from its former location and now looks as though it always resided on its new lot.