Home / Old House Blog / What’s That Under My Slate Roof?

What’s That Under My Slate Roof?

In response to Slate Roofs and Worn slate roofs - repair or replace, I’ve received many specific questions.  Several of the questions ask about what’s under a slate roof.  Although not common practice throughout the US, older slate roofs in my area are frequently installed over spaced wood battens rather than solid planks.  These narrow strips of wood are nailed on, perpendicular to the rafters and each course of slates are secured to each batten.  With this type of installation, the underside of the slate is exposed and visible.  More recent slate roofs installed on spaced battens often have roofing felt (tarpaper) under the slate.

There’s some in the roofing trade, as well as many inspectors, that believe felt underlayment is necessary for the performance of a slate roof system.   When this felt fails, at around 40-50 years, they pronounce the entire roof as in need of replacement.  I will always disagree.  A majority of the old buildings I inspect have slate roofs.  These roof systems were installed before the manufacture of roofing felt and perform just fine without it.  The only disadvantages are a small amount of wind-driven snow can blow “up” between the joints of the slate, when conditions are just right and slate dust on stored items in the attic.

Some of the questions I receive are about failing mortar under the slates.  Although mortar under slate roofs is not all that common, I’ve found 3 different types of mortar application.  The most rare is the coating of the entire underside of the roof system.  This application, also called rendering, is likely an attempt at insulating. Another application involves bedding the top of each slate in mortar.  This “lifts” the top of each slate so it lays flat over the slates on the course below. 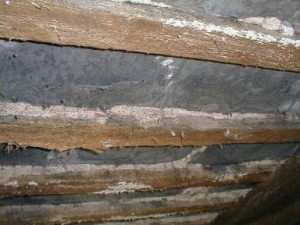 The most common use of mortar under slates is called torching.  This consists of a thin line of mortar trowelled across the top edge of each coarse of slate.  The purpose of this mortar is intended to stop the very small amount of wind-driven precipitation, common with slate roofs.

Failures of the felt underlayment or mortar under a slate roof does not pose a significant concern.  This is proven by the satisfactory performance of the multitude of slate roofs installed without these appurtenances.