The washer and dryer in my house are in the garage. When I moved in the dryer vent was simply lying on the ground blowing lint all over the garage. I have installed a 6" dia vent tube that goes up to the attic and then outside. The problem is that this run is about 20' long and I am concerned that the dryer blower doesn't generate enough air velocity to prevent lint build up in the tube and then, possibly, a fire. I would like to install a booster fan of some sort to help purge this tube but am wary of putting anything in this tube that could further cause lint buildup. Right now I am simply checking the tube every few weeks for lint buildup. Got any ideas?

I don't think you need a booster fan and if you had one, IT would get clogged with lint in no time.

If the vent is in the garage - why not just vent it out the (exterior) wall?

The bottom line - the length of the vent hose is not as important as the NUMBER OF TURNS the vent hose makes. Is it a run straight up? If so, then it may be fine.

Secondly, you need to put a bird-guard on the roof-top vent so birds can't get in there to build a nest.

Last, but not least, remember - lint can get clogged up and backed up in the DRYER also. Folks tend to study their vent lines and then forget about the dryer cabinet. NOT A GOOD IDEA. Open the cabinet up and look around - clean it up. Also check the blower wheel to make sure it is not clogged with lint.

We have an appliance repair business here in Illinois and have seen MANY lint fires, due to lint build up in the dryer cabinet.

A backed up lint hose will not allow proper exhausting of moist air and will cause lint to back up in the dryer cabinet. So the hose should be checked - and so should the dryer.

(build up of lint in the dryer or hose will cause the dryer to use more energy and require more and more time to dry clothes.)

The more cotton fabrics you dry, the faster the lint will build up.

Your problem is going to be this: a 6 inch diameter vent from a dryer will build up lint and get plugged faster than a proper size 4 inch vent. It's one of those air-flow/vacuum-dynamics type of things that does not seem to make sense at first, but it's true.
Top

A smooth metal dryer vent is also better than the flexible wire & foil or rubbber vents which trap more lint. Also avoid screws to hold sections together they also will trap lint.
Top

pkrogh wrote:Your problem is going to be this: a 6 inch diameter vent from a dryer will build up lint and get plugged faster than a proper size 4 inch vent. It's one of those air-flow/vacuum-dynamics type of things that does not seem to make sense at first, but it's true.

Yup. You're air isn't moving as fast in a 6in pipe as in a 4in pipe. Infact, your 6in pipe is 2.25x bigger (3^2 / 2^2) in cross sectional area. That means your flow is going to be that many times slower. The flow is what would carry the lint away. Think of it like this, if you had no vent pipe and it vented to the garage interior, your external garage door would be the pipe/vent. That's a huge size! Is it blowing it out the door? Nope. 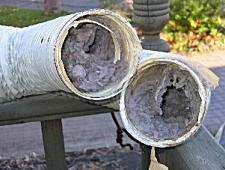 Whoa!!
That's one good reason to hang clothes out on a clothesline to dry (besides the springtime fresh smell

If your dryer is not working, then you should concern with an expert to get it repaired.
hanging clothes drying rack
Top
Post Reply
7 posts • Page 1 of 1