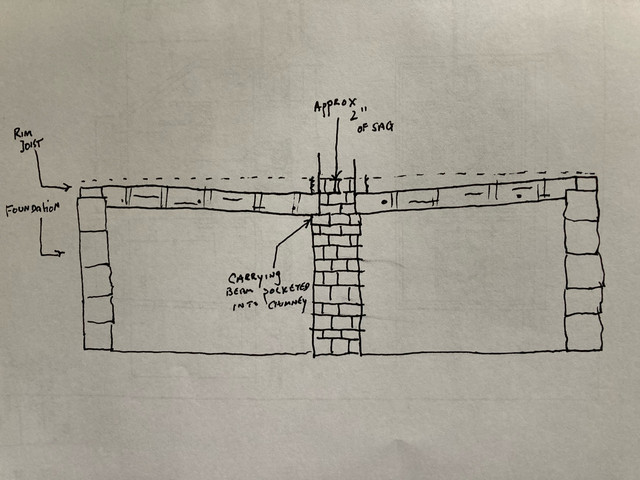 OK, old house experts—long post. This post is for serious remodelers who have done more than just the superficial stuff like paint and trim. I want to talk with the folks who had the DIY skill to deal with plumbing, electrical, and structural issues on their own (or with the help of skilled friends/family members).

House is 130 years old. I grew up in a 100 year old house. Old houses are common where I live. Entire basement floor is concrete (the uneven kind, typical in old houses around here). Foundation is in good condition and level from side to side. Floor joists run north to south, divided into 3 equal sections. Two (technically 3 separate pieces) of large 8x8 or 9x9 carrying beams support the joists. Joists are typical old joist style. No joist hangers. Notched into the carrying beams. Mostly in good condition. One or 2 joists developing cracks near their notched pocket.

One carrying beam (which spans the whole lateral distance in a solid piece is fine). It is supported by 2 approximately 5x5 or 6x6 posts in raised footers. Sits directly beneath my living room. Almost perfectly level.

The main issue is that the house is now sagging to the middle between my dining room and kitchen. I understand that some degree of settling is common in older houses. But I have approximately 2 inches of sag to the center of the house (the chimney) on the southernmost load bearing span. The Chimney is clearly a load bearing member. The carrying beams are pocketed into the masrony. Although, some shrinkage of the beams has occurred. And, as a result, they don't fit completely on the pocketed ledge anymore. They've been there for the last 130 years though. So I'm not worried about them going anywhere.

My suspicion is that the chimney (due to its incredible weight and probably inadequate footing beneath) has sunken a tad. To reiterate, I know the foundation is not the problem—I'm good on that front. After the chimney sunk, the carrying beams (which are still level from end to end across the span) have also sunken in the center. The result is a noticeable slope down when walking to the chimney and a slope up when walking away. The good thing is that the beams do not appear to be bowed or cupped significantly. They are mostly in plane. Just sloping down to the chimney now.

I assume there are folks in this forum who have done some work in their basement. My question is this: How did you correct the problems?

I know there are generally some important principles to follow when shoring up or raising up sagging beams. For example, the process of lifting an old house must be done slowly as to avoid cracking or stretching major systems like plumbing or electrical in the process. And that, even if you go slow, you could crack some drywall in the process.

My plan is to get heavy duty steel jacks such as the ones made by Ellis. I know those ones are expensive. But they seem to be some of the best ones in the business right now. I intend to pour raised concrete footers near the chimney (like the footers supporting my other main beam). I will raise the carrying beams by jacking approximately 1/8" to 3/16" each month. Micro increments each week to and then allowing the house to rest to adjust tot he micro adjustment. I do not believe the adjustments will affect the chimney because the beams are pocketed atop bricks supporting from the bottom, but there are no bricks above preventing upward movements.

After I get to a point where I'm comfortable with the slope, I will install 4x4 or 6x6 posts atop the raised concrete footers to permanently support the load. I'm not sure that I need more than 1 post on each half of the load bearing span. My main rationale is that the spans are not super long. However, I'd be interested in hearing from folks who have encountered similar problems and what they did to solve it.

Thanks in advance for any tips, advice, ideas, etc.
Top

Is it a wood house or a brick house?

I'm in a similar situation, with a brick house. Brick on the perimeter of the house does not sag over time, but wood does (in towards the middle). My concern jacking slowly with brick as you describe is that the ends of the beams will try to raise the brick up, and crack the brick walls.
Top

I just found this site, so my input is likely too late.
Would it be more practical to build a subfloor that's level?
2" high at the chimney feathering out to the walls.

I own an old balloon framed house built on timber, and the foundation beams (trees)
rotted out in every corner. Took a lot to get the house raised and replace them.
So, it might be easier to just cover it up?