Let's play the color game! You pick the color!

The porch on our foursquare is enclosed and is used year round. We ripped up the god-awful orange rug that has been there since 1972 (no offense to 1972) and found that floor seems to be in good shape. At some point it was painted the typical french grey but is in need of some love. The walls of the porch itself are white and the house wall is white/creamy stucco. The window sills and doors are black. The ceiling is original walnut colored beadboard.

A friend of mine in high school had a huge Victorian. They painted it in pinks and lavenders. The porch ceiling they did in sky blue, and the porch floor in green, like a field of grass. It was pretty cool!

But if you've got walnut bead board on the ceiling, I wouldn't change that. We've got bead board that's entirely alligatored and splashed with trim paint. I wish like mad it was in good shape.

There was a house I wanted to look at when we were buying this one. We never made it there. But it had a fully walled-in porch with a wood floor painted teal. The front door was also teal. It was really incredible. I'm gonna try to find pictures.

[EDIT] I can't find pictures. But here's a door that's about the same color. 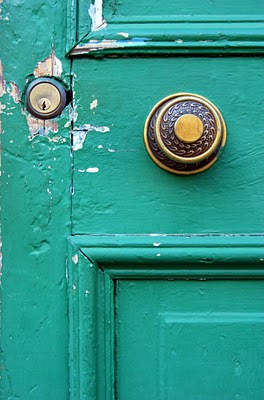 i hear that orange is a very popular color for 1915 four squares this season...

I'm at work, so no posting pics for me! Its funny you suggested teal b/c I pulled a paint chip close to that color and my husband hated it. So thats a no-go there. Anyone have pics of painted porch floors other than the standard Google photos?
Top

I plan to do the floor of my Foursquare porch in multi colored slate, you can do the same thing with paint.

The Opposite of Love is not Hate, But Indifference!

I used three shades of blue from Sherwin Williams. Dark blue on the floor, medium blue on the doors, and light blue on the ceiling. My porch floor was a medium porch gray before I painted it. Not sure what the original color was. After painting it the dark blue, I think next time I'd reverse the medium blue of the door to the floor and paint the doors the dark blue. But I do like the colors. I don't think the photos do a good job of picking it up, though.

BTW...There are four doors to the house on this porch, which is on the side of the house. One to the living room, dining room, kitchen, and pantry/laundry. The pantry/laundry door was originally a separate room from the rest of the pantry and contained a bathtub (the house had a "bath and a path." Bath was off the porch,and the path led to the privy). The only entrance to the bath was from the porch. The hand wash sink was on the porch, on the wall by the kitchen door. I have that sink in storage. The white clapboard you see here is what is underneath all the asbestos siding on the exterior of my house. Someday I'll uncover it and restore it. Above the door to the living room, the transom is missing the glass and has plywood there. I'll fix that someday, too. None of the other doors had a fixed transom.

As you can see the porch needs some love, and since the floor is grey it just kinda makes it look like an afterthought. Any suggestions?
Top

Any color you want. I'd say make sure it has the same undertone as the wood ceiling, whether that's a goldish undertone (like tomato red) or a bluish one (like candy-apple red). Walnut tends to look to me like it has an almost greenish cast to it. Your black and cream may have undertones to them too...I sang in a symphony chorus and when you dress 50 women in black on a brightly lighted stage, you can really see how some blacks eventually will fade to brownish, others are deep and sooty, and still other blacks have a bluish highlight like Veronica's hair in Archie comics.

So that's my advice on color selection. Here's a page of vintage color illustrations and palettes if that would be helpful.
http://www.flickr.com/photos/daily-bung ... 492336114/

Historically, most porch floors were painted battleship grey or shutter green, but its your house, so do what you want. are you planning on leaving the existing color scheme? do you have furniture to match? I would try to work with one of those colors. I have stained beadboard ceiling on my two porches, and my current front porch floor is brown indoor outdoor carpet over plywood. The plan is to take up the raised floor and, since my floors are cement, use the huge stack of terra cotta quarry tile I got at the restore for 20 bucks( seriously... like 600 tiles)
Steven R.
muskegon MI
Charles E. Johnson house
1916 prairie style