Ripe For The Picking: Tips On When You Should Harvest Vegetables

You've planted the seeds, watered the plants and waited for your crop to come in. But the real test for the home gardener is knowing when to pick the fruits of your labor.

"One of the advantages a home gardener has over people who purchase produce is that the crop can be picked at the moment of ripeness," says Pete Ferretti, professor of vegetable crops at Penn State's College of Agricultural Sciences. "Commercial wholesale producers pick many crops before they are truly ripe and allow them to ripen gradually during shipping, handling and display."

While commercial growers must meet the demands of the marketplace, home gardeners and most direct marketers need only please themselves when it comes to harvesting the crops they've planted. Ferretti also points out that vegetables are highest in vitamins and minerals such as potassium, magnesium and iron when they are fully ripe.

"For the best flavor and storage capability, pick your crops first thing in the morning," Ferretti says. "They will be cool and firm and will not have absorbed any natural field heat." 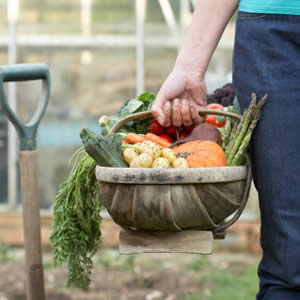 Tomatoes. Tomatoes should be picked when they are firm and have reached full color -- crimson, red, yellow or other colors depending on the variety. "It's probably a good idea to pick a range of ripening tomatoes every few days and let a few finish ripening after picking so you'll always have fresh, ripe tomatoes for salads and recipes," Ferretti says. "The ripening tomatoes will have slightly lower amounts of vitamins and minerals than the fully ripe fruits."

Peppers. Green peppers are picked and used before full ripeness, so Ferretti recommends that gardeners gauge ripeness by the size estimate on a seed packet or in a seed catalog. Firmness also is a ripeness indicator. If the pepper feels as though it has thin walls, it is not ripe. "When green peppers are allowed to ripen, they can turn into a rainbow of colors depending on the variety," he says. "If peppers have ripened to full color, use them quickly because they have only a few days of shelf life at that stage."

Zucchini. Ferretti says zucchini tastes best when harvested at lengths from 6 to 10 inches. "I wouldn't let them grow longer than a foot," Ferretti says. "After 8 to 10 inches, zucchini gets tough and develops more seeds. Longer zucchini that escaped your attention during picking can be grated, or breaded and fried."

Cucumbers. Pickle cucumbers should not be grown beyond approximately 4 inches. Other types, such as some burpless or Oriental varieties, can reach ripeness at nearly 15 inches. Ferretti says the longer cucumber types are ripe when they retain a hint of the ridges and spinyness associated with immature cucumbers. "Think of a cucumber as a balloon," Ferretti says. "If it's inflated to a perfect smoothness, it's too far gone."

Eggplant. Estimate ripeness by comparing the crop to the size and shape described on the seed package or catalog. "The eggplant also should be shiny and glossy," Ferretti adds. "The stem and cap should be mint green or purple, depending on the type."

Melons (muskmelons and cantaloupes). Most melons are perfectly ripe when they separate from the vine easily. "A small tug should be enough," Ferretti says. Other melon types are ripe when they turn from a greenish hue to a more yellow or orange color.

Watermelons. Each watermelon will have a pigtailed tendril of growth near the stem. "As that tendril browns or dies, look at the underside of the melon," Ferretti explains. "The underside should be slightly yellow. Inside, the seeds will be deep brown to black, not light tan."

Carrots. Ferretti says two blunt-nosed carrot types, Danvers and Nantes, grow well in Pennsylvania's dense soils. Because carrots invest most of their early growth into the plant leaves, the carrot, or root, does not mature until late summer or fall. Danvers varieties should be harvested when they reach about a 2-inch diameter. Nantes should be picked when they reach 1 inch in diameter. "To check diameter, just run your finger around the base of the plant and uncover the top of the carrot," Ferretti says. 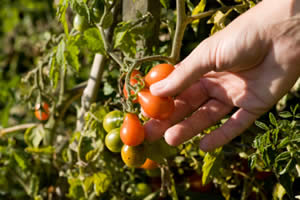 Leaf Lettuce and spinach. Although gardeners can harvest the entire plant head early to thin the crop, Ferretti recommends removing and using the outer leaves of the plant as you need them. The plant will keep producing leaves until a killing frost. "You can harvest chard and rhubarb the same way," Ferretti says.

Onions. Because most onions are grown from sets, which means many of the plants grow too close together, Ferretti recommends thinning out the plants. Onions are ready for final storage harvest when about half the plant leaves have turned brown or drooped. Push the rest of the leaves over and pick the onions about a week later. "Leave the onions in the field to dry for a few days, then hang them," Ferretti says. "Onions forming a seed head -- the green shoot that looks like a spear coming out of the onion -- should be eaten immediately, because they won't dry out adequately for storage."

Snap (green or wax) beans. The key to harvesting snap beans is to pick them before the pod shows any seed development. "There should be no swelling where you can see the seed in the bean," Ferretti says. "Also, the bean should literally snap when you break it. If they're over the hill, the bean will be rubbery."

Broccoli. Broccoli plants produce a large central head comprised of tightly bound buds. Ferretti says the head should be harvested before any hint of yellowing appears and before the buds separate. "Some broccoli varieties will continue to produce large shoots even after the central head has been harvested," Ferretti says. 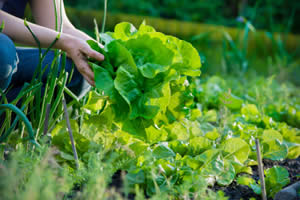 Flat edible pod peas. These crops, known as Chinese peas or snow peas, should be picked when still flat, before the pod reveals the outline of the internal seeds. Ferretti recommends checking the size description on the seed packet or catalog as well.

Round edible pod peas. Also known as snap peas, Ferretti says these varieties are the sweetest and most tender peas. They should be picked when fully round and smooth. The color should be mint green.

English peas. The pod should be shiny and swelled enough to suggest the outline of the peas. "All pea varieties should be cooled immediately after picking, because their sugars will turn to starch under warm conditions," Ferretti says.