Asthe weather warms, homeowners may panic if they notice large black ants -- mostlikely carpenter ants -- in and around their house, fearing that the home'sstructural timbers are at risk to the pests. But even if you have a carpenterant infestation, you probably have little to worry about, says a Penn Stateexpert.

"Although often blamed for causing damage to wood, carpenter antsusually are little more than a nuisance," says Steven Jacobs, seniorextension associate in entomology in the College of Agricultural Sciences.

"Carpenter ants are somewhat lazy," Jacobs explains. "Theyusually attack wood that's already rotted. If they run into a sound, dry pieceof wood, they generally won't go much farther. But they have been known to causeextensive damage to soft materials, such as insulation board." 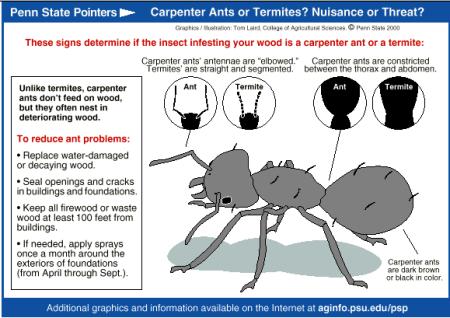 Carpenter ant workers are wingless, dark brown to black in color and 1/4 to 1/2inch long. The winged reproductives resemble the workers but are up to 3/4 inchlong. The ants' bodies are constricted between the thorax and the abdomen.

Because carpenter ants are social insects that live in colonies and excavatewood, they often are mistaken for termites. However, termite workers are creamywhite and live hidden from view. Winged termite reproductives may resemblecarpenter ants, but termite bodies are not constricted between the thorax andabdomen. Also, termites' antennae are straight with bead-like segments, whereascarpenter ant antennae are elbowed.

In nature, carpenter ants aid in the decomposition of dead, decaying trees byexcavating rotted wood for nesting sites. They eat dead insects and other smallinvertebrates as well as honeydew secreted by aphids and scale insects.

When foraging for food, carpenter ants may find their way inside your house.There, they will feed on meats and foods containing sugar and fat. In somecases, these foraging workers may establish a satellite colony in the house,congregating in existing voids, such as hollow doors or the space between studsin walls.

"In homes, the ants typically do not excavate wood for nests," saysJacobs. "They may tunnel through sound structural timbers, but this haslittle effect on the timber's structural integrity."

Jacobs says to get rid of the ants, the parent and satellite nests must befound and eliminated:

Jacobs says if you prefer to hire professional help to get rid of carpenterants, first get estimates from at least three reputable pest control companies.