We need advice on adding more insulation to the cathedral ceilings of our New Hampshire house (shown below).

The roof consists of 4x8 rafters spaced every 32 inches and topped with pine boards that originally served as both sheathing and the finished ceiling. Over the sheathing is 1 in. of rigid foam insulation and then the roofing shingles. Inside, the original owners nicely boxed in the rafters and added drywall between them. 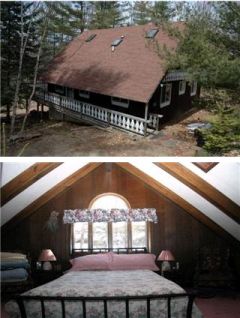 We could strip back the existing roof, add more insulation and re-roof, which seems like a lot of work. Or we could add a couple of inches of insulation over the existing drywall inside and cover it with a new layer of drywall or pine. What's best?

You have a couple of competing problems. One is how to get enough insulation in the roof to keep you cozy all winter without running up a huge heating bill.

The other is how to avoid moisture problems that could lead to mold or decay in the roof.

How much insulation is enough?

Opinions may vary but in your part of the country the R-value of insulation in the roof should be between R-40 and R-50.

The R-value of the foam already on your roof is probably between 4 and 6.5, depending on the type. In the very best case, you have a lot less insulation than you need. You could safely use the word "woefully" in describing the shortfall.

That's making the house hard to heat and cool.

If you add 2 inches of a high performance rigid foam board (isocyanurate, let's say), you'll get an added R-value of about 13. That would still be well short of where you want to be.

Another 6 inches of isocyanurate would add R-39 to what you currently have, a more reasonable goal.

You also have to deal with moisture

Heat flow is one issue. Moisture is another. These are topics that building scientists argue about a lot.

In very cold climates (this is you, New Hampshire), poorly insulated roofs lead to a phenomenon called ice damming. Thaw and freeze cycles produce a thick layer of ice at the eaves. Then water backs up the roof and eventually the roof leaks.

Insulating a cathedral ceiling from the outside
in a cold-weather climate:

Another potential problem is condensation. When the temperature of the roof deck falls below the dew point and a lot of warm, moist air from inside the house comes into contact with it the water condenses to a liquid state.

This can lead to a variety of problems, including mold and rot.

Builders traditionally leave an air space beneath the roof deck and build in air vents at the eaves and ridge to help carry away moisture.

You have an un-vented roof. That's much more common these days than it used to be, but not accepted by everyone.

Adding to the outside is more reliable

If you decide to add rigid foam insulation to the ceiling inside you'll have to nearly fill the rafter bays to get a layer of sufficient thickness. Another few inches isn't really going to do it.

In addition, it will be hard to stop the air leaks that contribute to moisture condensation and ice damming. And the rafters themselves (still exposed) are a less effective insulator than the foam.

Providing you want to keep the exposed rafters, adding another layer of insulation on the roof will give you a more reliable result.

Yes, it will be a pain in the neck and it won't be cheap. It will also bring its own complications -- such as how to detail the extra-thick eave you end up with.

Still, if you plan on hanging onto the house, and you want to keep the look of the exposed rafters, that's the right way to go.

If you don't care about the exposed rafters, you have other options for insulating the inside ceiling. It's a case of charm versus performance.