I was reading about balloon framing on an online forum. I think this might be how my house is built. Do you think it is really inferior and a fire hazard?

Balloon framing is a style of wood-house building that uses long, vertical 2" x 4"s for the exterior walls. These long "studs" extend uninterrupted, from the sill on top of the foundation, all the way up to the roof. When it first came into use, well before the mid-nineteenth century, it was a radically different type of construction from the "timber frame" or "braced frame" that preceded it for centuries. The earlier style timber framing used large timbers interlocked with chiseled joints (mostly mortise and tenons) secured with wood pegs. The balloon frame relies solely on nails to secure each piece. The only chiseling is for the horizontal boards that support upper level floor joists, the diagonal boards, or for corner braces that are "let in" to the studs so as to be flush with the wall surface. 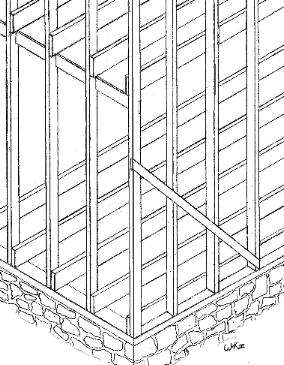 "Balloon" was originally intended to be a derogatory term implying a light weight structure that could be easily carried off in a breeze. I'd like to point out that there certainly are many, many balloon-framed structures, between 75 and 175 years old, that haven't floated away. When balloon framing first appeared, there's certainly plenty of evidence that there was disdain for this new type of construction. Many of those only familiar with the heavy timber framing of earlier times felt it would be suitable only for temporary structures. Some also assumed this type of framing could only be used in utilitarian, box-like buildings.

At first, most balloon framed buildings were rather plain and simple. This may be at least partly due to the architects and designers of that time ignoring the potential for new forms that could be created with the lighter frames. Another likely reason is the simpler framing method made it easier for settlers to new rural communities spreading west, farmers and others, not trained in the joinery of timbers, to quickly construct simple dwellings with the machine-made, standardized lumber and nails.

As this method of construction became more popular, it gradually gained acceptance from designers and was eventually used in the construction of many diverse and even very complex structural designs of the late Victorian period. It became the most common type of wood-frame construction from about 1890 until around the late 1930s and is found throughout the entire US.

Balloon framed buildings are certainly lighter than those built with the earlier braced frame method, but in my experience, properly constructed, they have survived quite well. Most have very thick planks for the exterior sheathing, nailed either perpendicular or diagonal to the exterior wall studs, significantly strengthening the framing. I've seen these exterior planks save termite-damaged or altered frames that would have likely failed without the reinforcement. All methods of old-house construction have pluses and minuses. This type has survived quite well and certainly filled a need at a time when our nation was rapidly expanding. 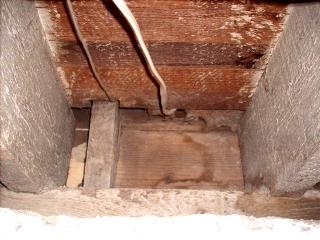 A minus of this type of framing is its fire hazard potential. In the event of a house fire, wall cavities extending from the foundation to the roof structure can be an open path for it to spread quickly, like smoke up a chimney. There have been numerous reports of fires originating in the basements or crawlspaces that have been first detected by smoke emitting from the eaves. The spaces between ceilings and floors are also interconnected to the wall cavities, which can allow a fire to quickly spread and possibly cause structural failure to floors without warning.

In major remodels involving opening walls and ceilings, it's possible to meet the current standards for fire stopping by installing solid blocking at the required locations in the open cavities. Another method is to install insulation, filling the empty cavities. For many old-house folks, who want to retain the original wall surfaces and aren't convinced of the actual benefits of adding thermal insulation in walls, there is one simple task that might offer a little resistance. Stuffing some fiberglass insulation up into the bottom opening of the wall cavities, from a basement or crawlspace can reduce the movement of air in the voids.

Bill welcomes questions for future columns. You may contact him at wkibbel@oldhouseweb.com