Scott Gibson, Contributing Editor
Tweet
Our house has two bathrooms but neither one of them has an exhaust fan. Is it worth the trouble and the expense to install them?

In a word, yes. And you'll know why if you've ever renovated an old bathroom and found mold and dry rot where you were expecting sound wood.

As originally built, many old houses were only slightly less drafty than their adjoining barns or carriage houses. They often they had little or nothing in the way of insulation. But at least moisture in the air dissipated easily.

Today, of course, our houses are tighter and better insulated - and most of us enjoy such luxuries as showers in our indoor bathrooms. These improvements make our homes more livable. But they also make our houses more susceptible to trapped moisture in wall and ceiling cavities. 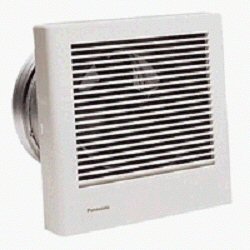 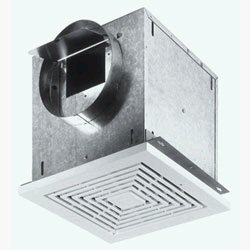 These exhaust fans fromPanasonic (left) and Broan-NuTone
are quiet and effective in getting rid of steam.

And so while few old houses will ever be as tight as the hermetically sealed structures we now build, mold damage is still a real threat.

Opening a window isn't enough to get rid of all the hot, steamy air a modern shower produces.

For that, you really need a fan.

Fans are much better than they used to be

No one likes a cheap bathroom fan. Their annoying rattle is an effective incentive not to use them.

But there are lots of very good ceiling-mounted fans on the market these days. Some of them are close to inaudible.

Broan-Nutone's QTXE fans, for example, and the Whisper series from Panasonic are rated at about 0.3 sones. This means they produce only about one-third as much noise as a quiet refrigerator in a quiet room. (By contrast, some run-of-the-mill ceiling fans are rated at 4 sones or more.)

In-line exhaust fans are another option. They can handle more than one duct so a single blower can be used to ventilate adjoining bathrooms or multiple vents in a very large bath. American Aldus and Fantech are two manufacturers.

Fan capacity is measured by how many cubic feet of air they can move each minute. For bathrooms of 100 square feet or less - and that will cover most bathrooms in older houses - a fan should move 1 cubic foot of air per minute for each square foot of floor area. So an 8-ft. by 10-ft. bathroom needs a fan rated at 80 cubic feet per minute.

Duct the fan to the outside and seal the line

Retrofitting a bathroom with an exhaust fan can be a pain in the neck.

You'll have to cut a hole in the ceiling for the fan, install a vent through the roof or a gable-end sidewall and connect the two with a duct.

Taking shortcuts, like running the duct to a soffit vent or the attic and calling it good enough, may be tempting but ultimately aren't worth it.

Some points to keep in mind:

If you don't have any access to the ceiling from above the job will be all that much harder. You'll be forced to tear out part of the ceiling to run the duct. Or use a through-the-wall fan. They're not quite as efficient as a ceiling unit, but they're a much better option than ignoring the moisture problem. 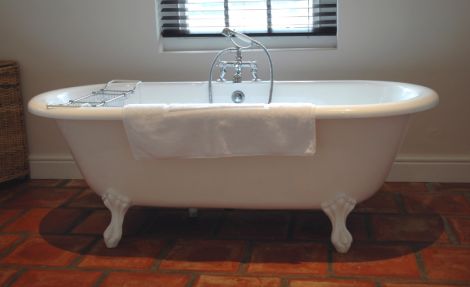 Pair the fan with a good switch

Bathroom fans are wonderfully effective if you run them long enough during (and after) taking a hot shower. But often people don't run long enough to be effective - count on at least 20 minutes.

Buying a timer switch is a good way to ensure the fan is really effective and simple timers aren't expensive.

Invest a little more and you can get a type of switch that turns the fan on automatically when humidity hits a certain level. Or buy a switch that can be programmed to run at certain times of the day (Tamarack Technologies is a good source for both). This last category of switch is one way of making your bathroom fan a makeshift whole-house ventilation system.

Now that's starting to sound up to date.