Bringing an old chimney up to par

I have a four-story, 1856 brownstone in New York City that still has all of its original fireplaces and grates. I've been told the old brick flues need to be re-lined. I guess the brick is disintegrating. Any suggestions? 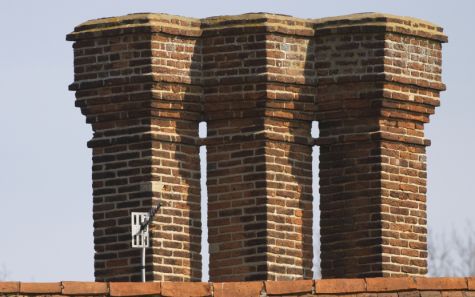 Yes. First and foremost, don't use the fireplaces until the chimneys have been deemed safe by a professional -- a chimney cleaning service or a mason, for example, or possibly someone from the fire department.

If the chimneys in your brownstone are original, they've got to be really tired. Neither brick nor mortar lasts forever and a chimney that old may not have a tile liner.

Liners have been standard in new construction for years, but they're lacking in old structures whose masonry has not been restored and updated.

Tile liners help keep flue gases where they belong. They isolate combustible building materials from high heat, and they prevent creosote and other by-products of combustion from seeping through porous brick and mortar.

Assuming your chimneys are unlined, you have at least a couple of options for bringing them up to snuff.

Liners made from aluminum or stainless steel are a relatively easy way of making unlined chimneys useable again. Aluminum can be used with some gas-burning appliances, but stainless steel is the right choice when wood or oil is the fuel.

Liners are either flexible or rigid, but in an old house whose chimneys take lots of twists and turns flexible pipe will be a lot easier to install. It's pulled through the existing chimney to create an airtight (read that safe) passage for smoke and other exhaust gases.

The process isn't cheap. Even small diameter pipe costs more than $25 per foot. But this route is certainly a lot less expensive and disruptive than rebuilding an old chimney top to bottom.

Another approach is to create a new chimney liner with a liquid grout that hardens to concrete-like consistency.

Supaflu is the company that pioneered this technique. A flexible bladder is fed into the chimney and inflated. Grout is poured in around it. In about a day, the mixture cures and the bladder can be deflated and removed.