I purchased an antique (hand-blown) bull's eye glass pane while living in England in the early '80s. How do I mount the pane in a window or door? And how much would glass like this be worth? 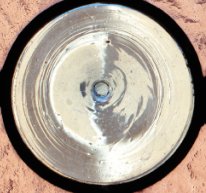 This isn't the first time that an object with little intrinsic value at the time it was made has gone on to fame and fortune in the hands of later collectors.

Bull's eye glass has just such a history. Until modern techniques were developed, one way of making window glass was to spin a blob of molten glass at the end of a tool called a pontil. Centrifugal force flattened the glass into a sheet, and when the tool was pulled away it left a characteristic bull's eye mark.

The relatively flat glass on the perimeter of this glass pancake was carefully cut into pieces and sold to the high-brows who could actually afford windows.

What was left, the stuff with the bull's eyes, went into lesser locations, like barns and sheds.

Now that it's old, it's charming -- and pricey.

It would take a specialist to give you an accurate estimate of how much that pane is worth -- and that certainly counts me out. But Robert Lichtman, a glass artisan in Connecticut who makes reproduction bull's eye windows, says a genuine antique pane could be worth hundreds of dollars. A variety of things would affect value, such as the size of the pane and condition of the glass.

You'll almost certainly have to build (or commission) a custom frame or sash for your English antique. A local cabinet shop should be able to handle that job.

Bull's eye glass is often fairly robust because it's thick, Lichtman says. That bodes well if you're thinking of putting the pane in a door that will get slammed from time to time. The trick will be to avoid creating pressure points along the edges that could lead to cracks.

Lichtman suggests skipping the metal glazing points that are typically used to fix glass in a frame. Instead, set the glass in a bead of silicone caulk that's applied around the inside of the frame.

Caulk will provide a form-fitting cradle for the glass and accommodate any irregularities without stressing anything. After the caulk has cured, you can add wood stops or glaze the window conventionally.

You would essentially be gluing the glass in place, but the process should allow the glass to move ever so slightly with changes in temperature.

Seal the frame to keep water out

You'll also want to prevent water from seeping between the glass and the glazing or wood stops.

In Lichtman's own house, a transom window over the door was being damaged by condensation forming on the inside of the glass. The moisture ran down the pane and behind the stops.

He added a storm window on the outside and a second panel on the inside, effectively sealing the sash from moisture.

If you want to learn more about the process of making the glass, check Lichtman's site, www.sugarhollowglass.com. And if you break your old piece of glass in the process of installing it, Lichtman will be glad to make you a replacement.