There's a crack about 8" long on the top of the large iron sewer line that runs through my basement. The surface of the pipe has some brownish-orange rust, but it seems to be a very thin coating. Before I call a plumber, I'm trying to do some research to determine if this is a sign that the entire piping system might need replacement. How long do these pipes last? Any insight would be appreciated.

About a dozen US cities possess cast iron pipes that have supplied water for over 150 years. Hundreds have cast iron water mains over 100 years old. Cast iron pipes used for waste piping, however, are subject to corrosive action that pipes carrying drinking water are not. 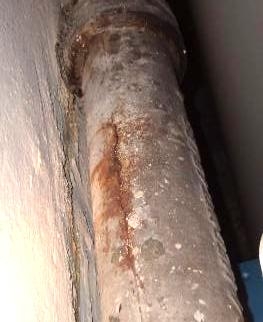 The external rust, unless showing deep pitting, is common and probably not a concern. I've heard of only a few cases of underground waste lines failing from external corrosion as a result of being in contact with unusually acidic soil. When cast iron waste pipes fail, it's usually due to corrosion from within.

As a result of what runs through waste lines, hydrogen sulfide gas can form. This can oxidize and produce sulfuric acid, which corrodes cast iron. Some drain cleaners also contain sulfuric acid and, if used continuously, can accelerate the corrosive action and shorten the life of the cast iron piping system.

When examining cast iron piping, you'll typically find two different signs of failure. One is the crack that you describe, usually forming on top of the pipe or at a seam, created by the form used during the casting process. This is likely due to the hydrogen sulfide gas collecting in concentration and the resulting acidic attack weakening the pipe wall.

The other external indication of failing cast iron pipes is blobs of rust, usually found on the underside of horizontal sections. The size of these blobs can be anything from little pimples to about the size of half a walnut shell. These aren't as obvious as cracks and can be overlooked because they don't perpetually leak. As the iron around a pinhole rusts, the iron expands and seals the leak. While they might not be actively leaking when discovered, it's certainly a sign that internal corrosion has breached the wall of the pipe. 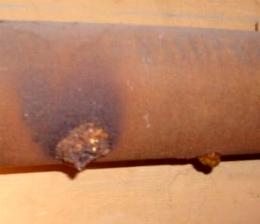 The old method of casting pipes, called the "pit-cast" method, can leave variations in the thickness of the pipe walls. The thinner-walled portions might be the first to show cracks or pinholes, but there are likely other areas of corrosion that just haven't surfaced--yet. Although more common, this corrosion isn't limited to the horizontal sections. Cracks, pinholes and rust blobs can appear on vertical sections as well.

Some homeowners, and occasionally some professionals, insist that patching a pipe that has cracked or developed a pinhole is an acceptable and permanent repair. Based on my experiences, I disagree. I recommend the section of pipe showing any sign of failure be removed and replaced by an experienced plumber. While the repairs are being performed, the adjacent sections can be evaluated. If the walls are getting thin from corrosion, removal and replacement of these sections is advised. 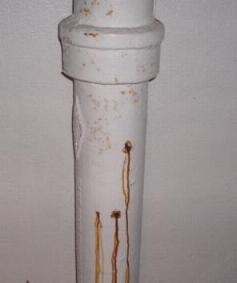