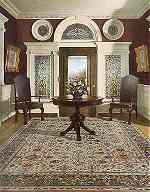 For flat plaster walls and ceilings, as well as decorative forms, the system to attach interior plaster to walls and ceilings primarily consisted of 1/4" x 1 1/4" wooden lathing strips nailed 3/8" apart against studs and joists.

First a scratch coat consisting of sand, lime, and cattle hair was troweled on the lath and pressed through the slots so as to slump over and form "keys."

Next, a brown coat was applied to establish flat and plumb surfaces. The earliest plasterwork consisted of two coats of lime and sand plaster; later in the 19th century, a third or finish coat was applied that consisted of both lime and gypsum. Decorative units were generally attached to the substrate using plaster as an adhesive.

Failure of the substrate is more typical than failure of the plaster ornament itself. Among the reasons for deterioration, structural movement and water intrusion are the most deleterious. Buildings move and settle, causing deflection and delamination which result in stress cracking. These cracks often begin at the corners of windows and doors and extend upward at acute angles. Roof or plumbing leaks make finishes discolor and peel and cause efflorescence, especially on plain-run or enriched cornices. Unheated buildings with water intrusion are subject to freeze-thaw cycles which ultimately result in base coat and ornamental plaster failure.

In addition, keying and adhesive properties may be further jeopardized by weak original mixes that were improperly applied. Substrate failure typically results from faulty lathing or rusty lath nails, causing ceilings to fall. In the 20th century, vibration from heavy vehicular traffic, nearby blasting, and even repeated sonic booms may contribute to damaging ornamental plaster. Inadequate support in an original design may also be to blame when particularly heavy units have simply broken off over time. Finally, new mechanical systems, suspended ceilings and partition walls insensitively installed in adaptive use projects, show little regard for the inspired decorations of earlier periods.

Plaster failure is a matter of degree. For example, top coat failure can be repaired by applying a new finish coat over a sound early substrate. Also, if cracking or loss of all three coats has occurred and is not combined with major structural failure, it can be repaired much like flat wall plaster. For ornamental plaster, however, repair beyond patching is often equivalent to targeted replacement of entire lengths or portions of run-in-place and cast ornamentation.

Pieces that are deteriorated or damaged beyond plain patching must be removed and replaced with new pieces that exactly match the existing historic plaster. For this reason, partial restoration is often a more accurate term than repair. But whichever term is used, it is not recommended that repair of ornamental plaster be undertaken at any level by property owners; it is a craft requiring years of training and experience.

A qualified professional should always be called in to make an inventory of ornamental plaster enrichments and to identify those details which are repairable onsite and which should be removed for repair or remanufacture in the shop.