A family of cave-dwelling early humans is preparing a feast of mastodon meat. The cook bends down to retrieve a stone utensil and is startled to uncover a cockroach, which scurries into a rocky crevice.

We may never know whether such an event took place, but it could have. While humans have existed for an estimated 5 million years, fossil evidence indicates that cockroaches have been on Earth for more than 300 million years. 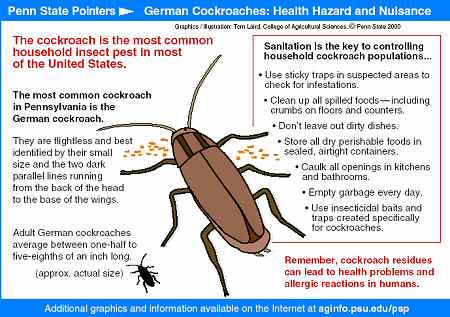 Cockroaches thrive in nearly every corner of the globe, despite our best attempts to eliminate them. About 3,500 species of cockroaches exist worldwide, including about 70 species found in the United States. Five of the most commonly encountered in Pennsylvania are: German, brown-banded, Pennsylvania wood, Oriental and American cockroaches.

"The German cockroach is the most economically important urban pest," Jacobs says. "It's also the most common cockroach species found in houses, apartments, restaurants, hotels and other institutions--not just in Pennsylvania, but in most parts of the civilized world."

Adult German cockroaches are one-half to five-eighths of an inch long and tan to light brown. They have fully developed wings but do not fly. The German cockroach is best identified by its small size and by two dark parallel lines running from the back of the head to the wings. It usually is found in kitchens (near dishwashers, stoves and sinks) and bathrooms.

German cockroaches prefer a warm, moist environment. They scavenge on a wide variety of food, but are especially fond of starches, sweets, grease and meat products. Garbage often is their principal food source. "Cockroaches are active mostly at night, when they forage for food, water and mates," says Jacobs. "During the day, they hide in dark cracks or crevices that provide warmth and humidity."

Cockroaches are persistent and hard to control. "These insects produce a large number of eggs and reach sexual maturity quickly," Jacobs explains. "German cockroaches carry their eggs until hatching time, and because they are smaller than other cockroaches, they can hide more easily. A single adult female, together with her offspring, may spawn 10,000 descendants in one year."

If not controlled, German cockroaches can become both a nuisance and a health threat. "German cockroaches produce odorous secretions that can affect the flavor of foods," says Jacobs. "When cockroach populations are high, you may notice this odor in the vicinity of the infestation."

Disease-causing organisms such as bacteria, viruses and protozoa have been found on cockroach legs and bodies. "These microorganisms can be deposited on food and utensils as cockroaches forage, which may lead to food poisoning, dysentery, diarrhea or other illnesses in humans," Jacobs says. "In addition, cockroach excrement and cast skins can cause skin rashes, watery eyes, sneezing and congestion in people with allergies."

The first step to controlling cockroaches, according to Jacobs, is to survey areas of known or suspected infestation. "Surveys are done by placing sticky traps at strategic locations," Jacobs explains. "Most commercially available traps come with bait to lure cockroaches. Where possible, place survey traps under equipment or counters, against a wall or in the corner of a floor, shelf or drawer. One week of trapping usually provides sufficient information."

Although it's difficult to keep cockroaches from entering your home via boxes, grocery bags, suitcases and other containers, you can take steps to prevent a serious problem. "Sanitation is the key," Jacobs says. "Clean up all spilled foods, including crumbs on the floor. Don't leave dirty dishes overnight. Store cereal, crackers, cookies, flour, sugar and bread in sealed, airtight containers.

"Empty garbage each evening into a sturdy container with a tight-fitting lid," Jacobs continues. "You also may have to make structural modifications, such as caulking holes in walls where pipes pass into the kitchen and bathroom areas.

"Insecticidal bait stations, dusts and sprays also will provide a measure of control," Jacobs says. "But for pesticides to be effective, the chemicals must be applied into or near harborage sites. All directions and safety precautions on labels should be read and followed to protect people, pets and the environment."