Help. We bought a house built in 1935 where all of the walls are old plaster over lath. I took off all of the old wallpaper, then primed and painted. But shortly afterward I noticed an air pocket in the paint. Of course I had to pick at it and the paint is peeling off in strips. How can I prep the walls to hold paint?

In a nutshell, something is interfering with the bond between the plaster and the paint.

And by now, old house enthusiasts who have experienced similar problems will be grumbling "calcimine." This mixture of whiting (crushed chalk), glue and water was once widely used and it's still applied in historic homes.

It was inexpensive, easy to make and it could be removed with water and a bit of scrubbing. It also was notorious for causing adhesion problems for future owners who wanted to spruce up the place with paint. Especially if they used acrylic paint. 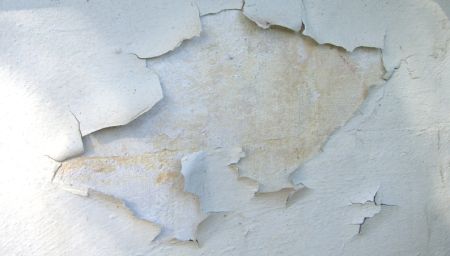 Calcimine was typically used on ceilings, not walls, says Bob Johnson of the Johnson Paint Company in Boston, which still sells a form of calcimine for historic repairs.

The reason, he says, is that the dried surface tends to be powdery, making calcimine unsuitable in places that are subjected to direct contact.

Furthermore, it's unlikely that wallpaper paste would stick to a wall that had been coated with calcimine.

Get the wallpaper gunk off the wall

So Johnson thinks the culprit is probably glue residue left behind when you removed the wallpaper.

Once wallpaper has been stripped, Johnson recommends sanding the walls to remove any brown crystalline deposits that remain. Those remnants of paste will prevent a good paint bond and lead to peeling.

If I were sanding down an old wall, I'd be careful to wear a respirator and mask off doors to the rest of the house with polyethylene plastic to keep dust from spreading.

If you're tackling this job in warm weather, put a box fan in a window and blow the dust-laden air outside.

After sanding the surface, clean it thoroughly with TSP (trisodium phosphate) and hot water. You can pick up TSP or TSP substitute in just about any hardware store. But be careful around this powerful cleaner. Protect your skin and your eyes from contact and follow package directions carefully.

After the surface has dried, Johnson recommends an oil-based primer to seal the plaster. You can follow that with either an oil or latex topcoat.

But you've already applied paint, which will make it harder to diagnose the problem. Johnson recommends you scrape all loose paint, then apply an oil-based primer with an oil or latex topcoat.

So what if it really is calcimine?

In Johnson's experience, calcimine was used only on ceilings. But surely there are old house owners who have encountered it on walls, too. One test is to rub the wall in the area where paint has peeled. Calcimine will leave a chalky residue on your finger.

To get paint to stick, the calcimine will have to go. Start by scraping away any loose paint. Then scrub the surface with water and detergent or TSP. It may take time, but the water will soak through the top surface and release the layer of calcimine from the plaster. A wallpaper steamer may speed up the process.

This probably won't be much fun and it's likely to take several sessions with an abrasive scrub pad to remove the calcimine. And you may not be able to get every bit of it.

Once the wall has been stripped to bare plaster, make any repairs to the plaster that might be needed. Then prime with a calcimine covering primer or oil based primer and paint the surface.

This time, it should stick.