My cellar doesn't seem to have any obvious sources of water but it does leak through the walls in some places when it rains, especially if the ground is real wet. I suspect this is because my home's gutters have been roofed over, as they are on many old houses, and water drips down off the roof and lands about a foot from the foundation walls. Short of uncovering those old gutters (not in the cards right now) can you offer any suggestions?

Your success will depend on how much elbow grease you're willing to contribute. Basement water problems usually can be solved, but the work is not very glamorous.

There are two potential sources of water in your basement: runoff from the roof that pools against the side of the house and high groundwater that forces its way inside. 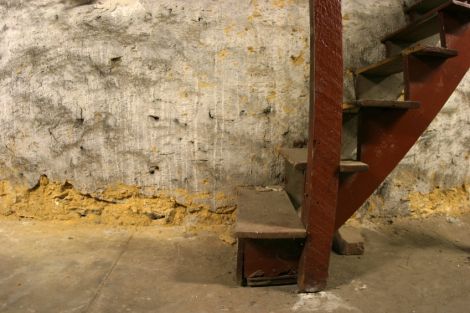 In new construction, builders anticipate these problems and install parallel perimeter drain systems on either side of the concrete footing at the base of the foundation. These drains carry water safely away before it gets inside. Asphalt damp-proofing, or a more sophisticated membrane, applied to the outside of foundation walls offers another layer of protection.

But older houses don't have these features, and foundations made from mortared or dry-laid stone are much tougher to seal.

Controlling water on the outside

Gutters are a good way of getting water away from the house, but if reviving your old gutters or buying new ones is really not in the cards at least make sure the ground is pitched away from the house. For a distance of at least 10 feet from the foundation wall, the ground should be sloped at roughly 1/4 inch to the foot.

I know, easy for me to say.

Over the years, landscaping around old houses can get a little haphazard. The north wall of one old place we owned had slowly disappeared into the ground so grade was actually a couple of inches above the lowest clapboard. After replacing the rotten sill, we realized there was no way the ground could be graded properly.

What to do with water inside the basement

Inside your cellar, you still may be dealing with groundwater that wells up from below. This extra dampness is doing your house no favors so getting it under control is worth your effort.

So what's next if your cellar keeps getting wet even after you've graded the ground so that rainwater runs away from the foundation?

You might consider installing a perimeter drain inside your foundation wall along with a sump pump.

These steps will keep groundwater below floor level and thus keep dampness and mold potential out of your house.

Dig a trench around the perimeter of the basement, lay in a base of crushed rock and then a 4-inch perforated drain wrapped in geotextile to prevent it becoming clogged with silt.

You'll also need to dig a hole, and then line it with concrete block or poured concrete to gather water and serve as a catch basin (or, if you will, a sump) for the sump pump. Something about 1 foot square and 18 inches deep should be enough. Locate it against a wall through which you can most easily route the drain line from the sump pump.

If the cellar floor is dirt, you can then cover it with a layer of polyethylene sheeting. Overlap and tape any seams.

Then again, it may not be so simple

These steps will make a big difference, turning a seasonally waterlogged basement into a space that's reliably dry. The building materials that you'll need are not especially expensive. But if your basement has a concrete floor, the work certainly will be more difficult.

The other, more complicated, option is to install a perimeter drain around the outside of the house. But because this involves moving a great deal of soil as well as the destruction of any flower beds right next to the house, I'd probably opt to do the work inside the cellar.

It's probably more than a weekend project, but your old house will be glad you tackled it.