I recently had to fire the carpenter who was building my deck. The deck was unstable and not built according to code. A second person rebuilt the frame of the deck and left the original ledger board in place. The first carpenter had installed aluminum flashing.

Is there any way I could cover the flashing without dismantling the deck, either with bituminous material or some other product? Deck boards will be tongue and groove GeoDeck. Since I am spending more for them, I want to take every precaution against leaks. GeoDeck recommends vinyl flashing. What do you recommend?

It's too bad you were forced to fire your first carpenter, but your concerns are well placed. A surprising number of people are injured every year when outdoor decks collapse.

Risks are higher for elevated decks. Remember the incident in Chicago three years ago? A dozen people died when two wood porches gave way during a party. 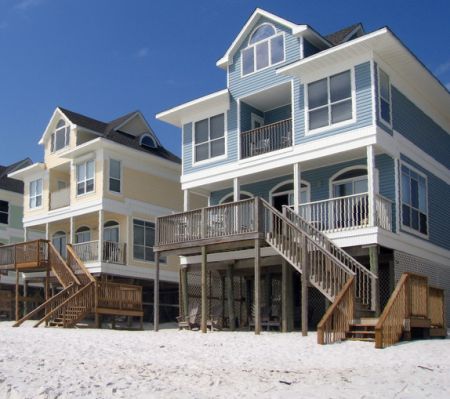 And the ledger - a length of dimensional lumber that supports the floor joists - is a key part of the structure.

Get the aluminum flashing out

Assuming the ledger is pressure-treated softwood, aluminum flashing is a very poor idea. It should be replaced with something more suitable.

The reason lies with the chemicals used as wood preservatives. Lumber treated with chromated copper arsenate was taken off the residential market at the end of 2003. It was replaced by two other preservatives: alkaline copper quat (usually just called ACQ for short) and copper azole (CA).

Both of these chemicals are considered safer than the old stuff because they do not contain arsenic. But they still contain quite a bit of copper. As a result, they will corrode aluminum flashing as well as ferrous metals.

Theoretically, you could use aluminum flashing but only as long as it was completely isolated from treated wood. A layer of self-stick flexible material such as Vycor would probably work.

But vinyl or even copper flashing would be a safer choice.

If you leave unprotected aluminum in place it will fail eventually. When that happens, water will seep behind the ledger and cause some real problems.

On the plus side, unless the deck boards have been installed, it shouldn't be difficult to replace the aluminum flashing.

It's typically installed over the top edge of the ledger and up the wall of the house several inches. It's counter-flashed with the siding.

So you may have to remove a small amount of siding to replace the aluminum but it will be worth the effort.

Check the type of fasteners, too

While you're at it, you might ask your new carpenter to check the type of fasteners that were used to connect the ledger to the house.

According to the Southern Pine Council, fasteners should be made from hot-dipped galvanized steel with a minimum coverage of 1.85 ounces of zinc per square foot (that standard is called G185 ). Do not use electroplated fasteners.

You also can use 304 or 316 stainless steel, which is even less prone to corrosion.

But no aluminum and no plain carbon steel. If the wrong type of fasteners were used they should be replaced.

Fasteners should be installed at the spacing required by your local building code. Whether they are lag screws or through-bolts, they should be attached to something solid - the rim joist would be typical - and not just the sheathing.

Joist hangers, if they were used on your deck, are another potential trouble spot. They are susceptible to the same corrosion problems as fasteners.

They should be made from stainless steel or galvanized steel with a G185 coating thickness.

Connectors made with thinner galvanized coatings can be used in some conditions as long as they are protected from direct contact with treated wood.

But in severe conditions - which means a wet, exterior environment or a seaside location - stainless steel is the best bet.

When in doubt about your locale, consult the manufacturer or a qualified professional (that would not be your first carpenter).