I live in a 150-year-old house that has old plaster ceilings and walls. We have noticed a few small areas damaged by water, but had no real problems until this week when a piece of ceiling - the size of a sheet of plywood - fell in our living room. I am really nervous about the rest of the ceiling and debating whether to replace the whole thing or repair the hole. Is it true that if I don't see cracks and splits in the paper covering the ceiling and the plaster seems firm to the touch then it's safe? 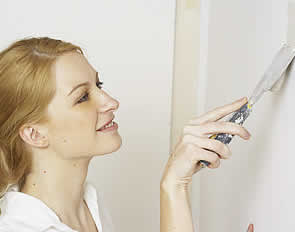 Possibly, but this is a good time for a thorough inspection to make sure you're not surprised a second time. Although plaster is now applied over a substrate that looks a lot like gypsum drywall, it was once troweled over wood lath that had been nailed to studs and ceiling joists. As the plaster was spread over the surface, it oozed between strips of lath. These blobs of plaster formed keys that mechanically locked the plaster to the wall or ceiling. But in time, the keys can break off. And when they do, there's not much holding the plaster in place.

Appearances can be deceiving. From the floor, you may not be able to tell when the plaster is beginning to separate from the lath. Heavy foot traffic (or break dancing) on the floor above the ceiling may pop those plaster keys one by one and allow the plaster to sag.

To find out, all you'll need is a step ladder and a little time. Put the palm of your hand flat on the ceiling and press gently, but firmly, upward. If the plaster is well anchored to the lath, you will feel no movement. If the plaster has separated from the substrate, the ceiling will move. You may even hear some crunching noises, as bits of loose plaster are pressed against each other. Work your way around the room so you cover the entire ceiling. With any luck, damage will be limited to the area where plaster has already fallen.

But you might very well find other areas where the same problem is brewing. If damage appears widespread, I'd certainly consider tearing the ceiling out and replacing it with new plaster or gypsum drywall. Unless you're living in a historically important house or determined to keep all its original features.

Repairs will take some patience

If loose plaster appears limited to a few small areas, you can try reconnecting it to the lath with plaster washers. Drilling a shallow recess with a spade bit at each washer location will allow the washers to sit flush with the surface. That will mean less work for you when you apply final coats of plaster or drywall compound to flatten and finish the surface.

A more reliable approach, explained by Maine plaster specialists Peter and Noelle Lord, is to drill a series of one-quarter-inch holes in the ceiling, inject an adhesive between the plaster and lath, and brace the plaster until the glue dries. As for the section that's already caved in, you can fill most of the void with pieces of blue-board and apply a skim coat of veneer plaster, or use gypsum drywall and premixed drywall compound.

It probably will take more time than you'd guess (it's harder than it looks), but you already know that - living in an old house will do that to you.