My two-story house in rural Indiana was built before 1860. The bricks were made on site, as it was a brick and tile factory during the Civil War. The original house has a stone foundation and crawl space, and the supporting wall is about a foot-thick brick wall that is now disintegrating into powder. What could be causing this? Is there anything I can do to save it? How should I go about stopping the damage before my house caves in? 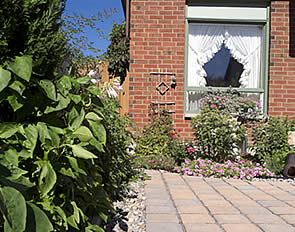 It may not be possible to arrest the disintegration of the bricks in your supporting wall, but if the wall is a foot thick it is probably providing plenty of support for the time being. Unless there are obvious signs of an imminent collapse, there's no need to panic.

Modern brick-making is a tightly controlled manufacturing process in which bricks are fired and cooled in precise steps. Temperatures inside a tunnel kiln can hit 2,400° F. and the result is an extremely hard and durable building component. Before all this equipment was developed and refined, making bricks was more of a crap shoot, and clay that was dug and mixed on site could have been of uneven quality. Unpredictable kiln temperatures likely produced bricks of varying hardness.

If they were undercooked, bricks could be porous and weak. And when those bricks are constantly battered by weather and the freeze-and-thaw cycles of a northern climate it's no wonder they erode over time.

Make sure the house is stable.

When foundations, sills, and other load-bearing parts of a house fail, the clues should be obvious. They can include diagonal cracks in exterior walls and sagging floors, doors, and windows that no longer open or close properly. Checking for these problems will reveal any obvious first signs of instability.

If none of those things are evident, and floors and walls are sound and straight, you should have plenty of time to figure out a long-term solution. A foot-thick wall will provide a great deal of support even if the outer surface is beginning to erode. Unfortunately, the opposite is also true: If the brick supporting wall shows signs of collapse, or it can no longer support structural parts of the house, you should call in a mason, carpenter, or both for immediate repairs.

I'd enlist the help of a mason who has worked on old houses. He or she could tell you whether there is any way to reinforce the existing brick or, if damage is limited to a small area, replace some brick without tearing out the entire wall. My hunch is that the old brick should come out, and be replaced with a bearing wall of new brick or concrete block with a brick facing. In the long run, removing suspect materials completely is the right way to go.

It may cost a little more, but it's often faster than trying to work around old problems. And you won't lie in bed at night wondering whether the kitchen floor will still be there when you get up in the morning.