I live in a 106-year-old home with a stone foundation and a damp basement. Most of the basement has a concrete floor but in a back room there is a clay floor where most of the moisture is. I just obtained an estimate from a waterproofing company to install a pump inside, and it was very costly. I was told I have water pressing against my stone walls and if I don't do something it will crumble. The wall is very level and appears strong. I already use a dehumidifier. Suggestions? 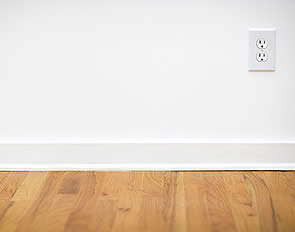 Chronically damp basements are more than a nuisance. Moisture can lead to a number of problems, including peeling paint, mold, and that musty smell that seems to hang in the kitchen. So your concerns are not misplaced.

But before launching into an expensive job consider a few less painful fixes.

Start by checking the grade around your house. It should slope slightly away from the house for roughly 10 ft. so rainfall doesn't pool around the foundation. Water that collects against the back of a stone foundation has a way of getting through gaps in the mortar.

If your house doesn't have any gutters, consider adding them. They can be a maintenance pain in the neck, true, but they also divert a lot of water away from the foundation. If you can, connect the leaders to a drain that carries the water safely away.

There are things you can do inside, too.

If the back room with the clay floor is simply damp - that is, no pools of standing water and no little creeks when it rains it might be that moisture is simply migrating up from the ground. One simple solution is to cover the floor with heavy polyethylene sheeting.

Roll out the plastic, overlap and tape any seams and try to seal the plastic against the sidewalls as best you can. This will keep a surprising amount of moisture out.

If the mortar in your stone foundation is falling out or just plain missing, repoint it. If there's a great deal of water pressure on the other side of the wall, this won't solve the problem. But if the source of the moisture is merely damp earth, it will help.

Serious water may call for serious solutions. I'm not sure when builders began to use perimeter foundation drains, but my guess would be these were not the norm 106 years ago. Too bad, because perimeter drains are very effective at removing water before it gets inside.

Putting them in now is a last resort because it would involve digging a deep trench around the house. You can kiss those flower beds goodbye.

This may be why the waterproofing company you contacted suggested a sump pump. It would be installed in a concrete or plastic sump that's fed by perimeter drains running along the base of the foundation walls.

When water reaches a certain level, the pump is automatically activated and the water is pumped up and out. Although the best option is to stop the water before it gets inside, sump pumps work well.

Breaking up the concrete around the edge of the floor to install drains would be time consuming and, as a result, expensive.

So you have a number of options. My first call would be to at least one other contractor. Ask for another opinion (and another bid). The fact that the walls are plumb and strong suggests the situation is not as dire as the first contractor suggests.

And in the meantime, by all means continue to use your dehumidifier.