I replaced the flapper and seal between the tank and bowl in my Kohler toilet after the toilet ran every 15 minutes. Now that problem is solved, but I have another: ever since the replacement, water doesn't completely rinse the bowl. There is plenty of water pressure at the bottom of the bowl but only one of the small holes at the rim produces a trickle of water. I've tried clearing the holes with compressed air but no luck. Am I doomed to replace the whole toilet? 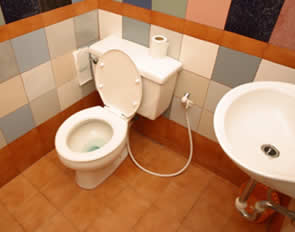 Maybe not--although there may be good reason to. We'll get to that later. But first, your repair.

In a two-piece toilet, the flapper at the bottom of the tank provides the seal between the tank and the bowl. When you trip the flush mechanism, water is released from the tank. When the flapper doesn't re-seat itself properly, it allows water to trickle out of the tank. Periodically, the float inside the tank will drop far enough to open the water supply valve and replenish the tank.

These flapper valves don't last forever. So you did the right thing by swapping it for a new one.

And that should have solved your problem--except that you might have used a part that isn't compatible with your Kohler toilet.

Find the model number and get the right part

I called Kohler's customer service line for advice (800-456-4537) and was told that using a generic flush valve could explain the problem you describe.

(Most of us have probably had the misfortune of speaking to a customer service representative who, while well meaning, was nearly impossible to understand. You won't have that experience with Kohler).

Kohler's suggestion is to find the model number of your toilet and then order the specific parts that go with it. You should be able to find the number inside the tank or possibly on the underside of the tank cover. Armed with this information, you can pick up the right part from a plumbing supply house. Toilets last a long time, and Kohler stocks parts you might assume have long since been discontinued.

The toilet bowl is just a casting of vitreous china. There are no moving parts you can fix or replace. You can double check, but it's hard to see how your repair might have introduced gunk or debris that would clog the holes around the rim. Kohler's suggestion makes sense and it won't cost much to try it.

Unless your toilet is of fairly recent vintage, this could be a good time to replace it. If your toilet is old, it might use five gallons of water or more per flush, even if it's in perfect condition. In 1992 the government imposed a 1.6-gallon per flush (gpf) limit to lower water use. Early low-flush designs were not known for their efficiency. That's changed dramatically and manufacturers have continued to find ways of making less water do more work. You'll find 1.4 gpf models on the market these days along with dual-flush toilets that can use even less.

Installing one of these toilets can save thousands of gallons of water per year. You'll feel good not only because you're conserving water but also because the toilet will work the way it's supposed to.