Fixing Leaks in a Stone House

We live in a 1700s-something stone house that was finished with stucco. We have had (and probably still have) leaks inside the house that seem to be coming down through the stone in spite of the stucco covering. A few may have been fixed while rebuilding outdoor windowsills above these areas, but there are likely other leaks. Would it make sense to remove the stucco and repaint all the stone? 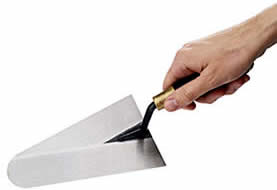 Don't tear it off just yet.

Stucco was used as an exterior finish in the U.S. as early as the 18th century, often over rubble walls that were not intended to be seen. It's unlikely the stucco on your 1700s house is entirely original - surely it has been patched and repaired over the years - but it still might have some historic value.

If it's in good repair, the stucco should provide a reliable weather barrier - certainly good enough to keep water out of the house. So unless big chunks of stucco are separating from the stone or are otherwise beyond repair, try a less drastic solution first.

Where's the water coming from?

Water might be wicking up from a damp basement, or it could be condensation from an interior source - an improperly vented dryer, for instance. But let's assume water is entering the house from the outside.

There could be many causes: missing or damaged flashing over doors or windows, settling in the house that has opened up cracks in the walls, damaged gutters that spill water directly onto outside walls, or surface defects in the stucco that are letting lots of water pass through.

I'd start with a very careful look at the outside of the house, starting at the top of the wall that's leaking, and working down. Water has a funny way of traveling a distance before it shows up. A leak could be some distance away from where you're seeing water on the inside.

I know it's obvious, but look for any place that water might creep in. If you've been working on windows, check the flashing at the top to make sure it's still there and that it looks sound. Take a look at your gutters and downspouts. Is there a roof penetration nearby (a chimney cricket, plumbing vent or dormer) that could be leaking?

Repair stucco if you can

Once you've accomplished that inspection you'll be old friends with the condition of the wall itself. Fissures and cracks in the wall could be admitting water and, yes, if the mortar between the stone in your wall is in terrible shape or missing altogether it would make a convenient path for moisture. So it may be a question of repairing just the outer skin of your house to once again enjoy a weather-tight building.

And this is where it gets complicated. Stucco, like plaster, is applied in two or three coats. Before the middle of the 19th century, it was made from lime, water and sand with a natural fiber - animal hair or straw - added to give it strength.

Later, portland cement became a common component of stucco. It's harder and more rigid than lime stucco and for that reason the two materials don't get along very well. So whoever repairs the surface (that probably should not be you unless you have a lot of practice as a plasterer) will have to figure out what type of stucco is already there.

Early stucco finishes were often protected with whitewash that contained lime. The lime toughened up the stucco and helped seal hairline cracks in the surface. Stucco might also have been waterproofed with wax. Your wet walls might be cured by some relatively simple repairs and a new topcoat of whitewash or latex or cementitious paint.

Repairing and applying stucco is probably not a good job for beginners. Your best bet is to contact a skilled stucco applicator and ask for advice. I'll bet you can find someone who's seen this problem before.