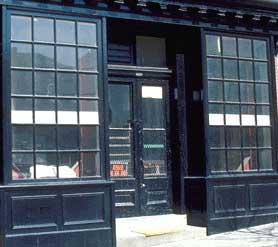 Above is a well-maintained metal storefront.

Historic metal building components were often created by highly skilled, local artisans, and by the late 19th century, many of these components were prefabricated and readily available from catalogs in standardized sizes and designs. 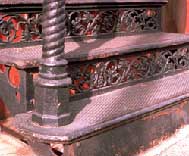 Identify, retain, and preserve architectural metal features such as columns, capitals, window hoods, or stairways that are important in defining the overall historic character of the building; and their finishes and colors. Identification is also critical to differentiate between metals prior to work. Each metal has unique properties and thus requires different treatments. At left is is a nice example of cast-iron steps with distinctive cut-out work.

Protect and maintain architectural metals from corrosion by providing proper drainage so that water does not stand on flat, horizontal surfaces or accumulate in curved, decorative features.

Clean architectural metals, when appropriate, to remove corrosion prior to repainting or applying other appropriate protective coatings.

Identify the particular type of metal prior to any cleaning procedure and then testing to assure that the gentlest cleaning method possible is selected or determining that cleaning is inappropriate for the particular metal.

Clean soft metals such as lead, tin, copper, terneplate, and zinc with appropriate chemical methods because their finishes can be easily abraded by blasting methods. 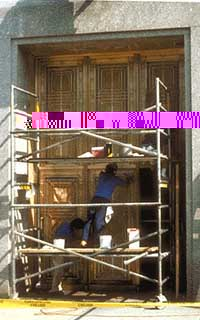 Use the gentlest cleaning methods for cast iron, wrought iron, and steel--hard metals--in order to remove paint buildup and corrosion. If hand-scraping and wire brushing have proven ineffective, low pressure grit blasting may be used as long as it does not abrade or damage the surface.

Apply appropriate paint or other coating systems after cleaning in order to decrease the corrosion rate of metals or alloys.

Repaint with colors that are appropriate to the historic building or district.

Evaluate the overall condition of the architectural metals to determine whether more than protection and maintenance are required, that is, if repairs to features will be necessary. 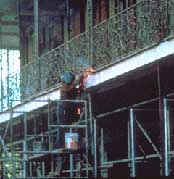 Repairing architectural metal features by patching, splicing, or otherwise reinforcing the metal following recognized preservation methods. Repairs may also include the limited replacement in kind--or with a compatible substitute material--of those extensively deteriorated or missing parts of features when there are surviving prototypes such as porch balusters, column capitals or bases; or porch cresting. 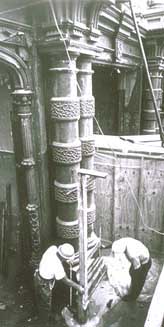 Replacing in kind an entire architectural metal feature that is too deteriorated to repair--if the overall form and detailing are still evident--using the physical evidence as a model to reproduce the feature.

If using the same kind of material is not technically or economically feasible, then a compatible substitute material may be considered. At right, missing cast-iron elements are being replaced with cast-aluminum.

Designing and installing a new architectural metal feature such as a metal cornice or cast iron capital when the historic feature is completely missing. It may be an accurate restoration using historical, pictorial, and physical documentation; or be a new design that is compatible with the size, scale, material, and color of the historic building.