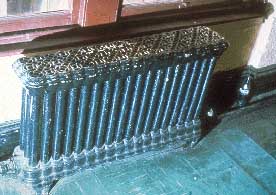 Mechanical, lighting and plumbing systems improved significantly with the coming of the Industrial Revolution.

The 19th century interest in hygiene, personal comfort, and the reduction of the spread of disease were met with the development of central heating, piped water, piped gas, and network of underground cast iron sewers.Vitreous tiles in kitchens, baths and hospitals could be cleaned easily and regularly.

The mass production of cast iron radiators, as pictured above, made central heating affordable to many; some radiators were elaborate and included special warming chambers for plates or linens. Ornamental grilles and registers provided decorative covers for functional heaters in public spaces.

By the turn of the 20th century, it was common to have all these modern amenities as an integral part of the building.

The greatest impact of the 20th century on mechanical systems was the use of electricity for interior lighting, forced air ventilation, elevators for tall buildings, and electric heat.

At left, is electric lighting and a decorative ceiling in an early 20th century office building. The new age of technology brought an increasingly high level of design and decorative art to the functional elements of mechanical, electrical and plumbing systems.

The visible decorative features of historic mechanical systems such as grilles, lighting fixtures, and ornamental switch plates may contribute to the overall historic character of the building and should thus be retained and repaired, whenever possible.

Their identification needs to take place together with an evaluation of their physical condition early in project planning. On the other hand, the functioning parts of many older systems, such as compressors and their ductwork, and wiring and pipes may often need to be upgraded or entirely replaced in order to accommodate the new use and to meet code requirements.

Identify, retain, and preserve visible features of early mechanical systems that are important in defining the overall historic character of the building.

This may include radiators, vents, fans, grilles, plumbing fixtures, switch plates and lights. At right, an ornate gas lighting fixture has been electrified. 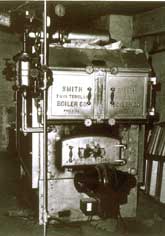 Protect and maintain mechanical, plumbing, and electrical systems and their features through cyclical cleaning and other appropriate measures.

This boiler has been kept in good operating condition through ongoing maintenance.

Prevent accelerated deterioration of mechanical systems by providing adequate ventilation of attics, crawl spaces, and cellars so that moisture problems are avoided.

Improve the energy efficiency of existing mechanical systems to help reduce the need for elaborate new equipment. Consideration should be given to installing storm windows, insulating attic crawl space, or adding awnings, if appropriate 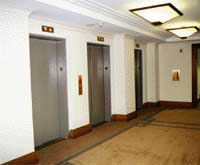 Repair mechanical systems by augmenting or upgrading system parts, such as installing new pipes and ducts; rewiring; or adding new compressors or boilers.

At right, these elevators have been rehabilitated in a late 1920s commercial office building.

Replace in kind--or with compatible substitute material--those visible features of mechanical systems that are either extensively deteriorated or are prototypes such as ceiling fans, switch plates, radiators, grilles, or plumbing fixtures.

Step 5: Alternations/Additions for new use

Install a completely new mechanical system if required for the new use, so that it causes the least alteration possible to the building's floor plan, the exterior elevations, and the least damage to the historic building material.

Install the vertical runs of ducts, pipes, and cables in closets, service rooms, and wall cavities.

Install air conditioning units, if required by the new use, in such a manner that historic features are not damaged or obscured and excessive moisture is not generated that will accelerate deterioration of historic materials.

Install heating/air conditioning units in the window frames in such a manner that the sash and frames are protected. Window installations should be considered only when all other viable heating/cooling systems would result in significant damage to historic materials.