Home is here the hearth is 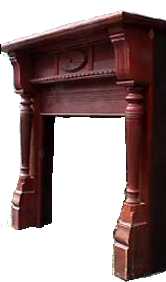 "Nice fireplace," my friend said in passing as she walked into my living roomand sat on the couch.

"Nice fireplace?" I repeated, as though her genuine compliment was nearly aninsult.

"Let me tell you about that fireplace," I said as I strolled over to the oakmantel and stroked the old wood with a soft touch that represented two parts reverence andone part exasperation.

Some folks who visit our home just don't understand the full import of before and after- especially when it comes to things like stripping wood and removing a good dozen layersof paint from a 100 year old fireplace.

I figure it is my duty, my calling, to educate those folks.

"You know," I tell them with a serious tone to my voice, "when we boughtthis house, the fireplace was covered in beige latex paint. Beige!"

And from there, I tell them as succinctly as possible, about the dozens of hours Ispent stripping layer after layer of paint off the old oak mantel.

When I've finished my condensed version of this little tale, some people have that"deer in the headlights look." Others simply nod their head and ask me how mygirls are doing in school. But there are those who launch into their own war stories, andtell me about the time they found walnut hardwoods buried under lime green paintedmoldings.

No doubt about it: Stripping paint separates the men from the boys, as it were. Or theold house lovers from the weekend remodelers.

Two years ago, when my husband and I first walked into the living room of this 100 yearold home, my eyes were drawn to the lovely coal-burning fireplace in the corner of theroom. Sitting at an angle between the pocket doors and the living room window, thefireplace beckoned me to come closer and ponder what kind of gorgeous wood lay hiddenunderneath the layers and layers of detail-numbing paint.

As my eyes and thoughts pulled away from fireplace and scanned the room, I noted onesignificant problem with the mantel and the living room and the entire house.

Everything in the house was painted, papered, paneled or plopped in either beige orblue.

Glancing around the room, I could not find a spot where beige and blue were not.

After talking with the real estate agent and haggling with the seller, we settled on$50,000 for the TLC-needing, 1,800-square-foot home.

The packing boxes which held all our earthly possessions were still in our midst when Isilently migrated over to the mantel and started to do a "quickie" scraping onthe Corinthian columns.

"Rose," he said with a voice still weary from our marathon unpacking session,"let's wait and get into that once we're all settled in."

"Okay" I replied as I redirected my energies back to unpacking.

But I still wondered what lay hidden under those layers of beige paint.

A few days later, I decided to test a "sample" spot on the back of one ofthose columns. But just scraping at the paint with a putty knife was neither productivenor satisfying. Getting out the heat gun, I noticed for the first time that there was anoutlet right beside the mantel, near the baseboard.

"It's a sign," I thought, as I plugged in and fired up my old heat gun.

Some 10 to 12 layers of paint willingly surrendered their spot on the mantel piece,curling up and dying in quick order and falling in smoking heaps to the ground. As Isuspected, the mantel had originally been varnished. Fortunately, the brute who firstpainted over this natural woodwork had not bothered to sand off the old varnish. Thelayers of paint peeled away easily, exposing a solid oak mantel with beautiful veins and adeep dark patina.

In a very short time, my one hidden spot was no longer hidden. I looked up at the clockand realized I had been at work for almost two hours and had stripped about one third ofthe mantel.

When my spouse came home and saw the disfigured mantel - now looking like a salvagedremnant from a house that had been on fire, he drew a deep, patience-inspiring breath andsaid "I guess we're working on the mantel now."

Burning paint off the first third of that fireplace mantel was highly entertaining andrewarding. The next third was not so invigorating. The last third, which consisted ofdigging out great quantities of latex, oil and leaded paint from intricate spaces andplaces was brutal.

I managed to scorch the top of one of the columns, by getting the beige paint too hot,which in turned burned the intricate woodwork underneath.

I had hoped that if I got the paint hot enough, it would bubble out of the dark andhidden places.

It didn't happen that way.

Finally, after investing about 18 hours in the project, the paint was completely burnedoff the entire mantel and there were only two or three scorch marks.

The next step was to pull the mantel off the wall so we could take it outside and applythe paint remover.

My husband paused as we stood in the corner of the living room and I handed him the prybars and tools of destruction.

"Once we pull this off," he said, looking deep into my eyes, "I want youto stick with it and finish it and don't begin another wood working project until this oneis done."

"Sure, sure, sure," I quickly agreed, hoping he wasn't serious.

The mantel was held in place by fewer than a dozen strategically placed nails. It cameoff the wall easily.

Behind the mantel we discovered a small oval photo of a woman wearing a long skirt anda high collared blouse, very turn-of-the-century looking. Water stains and dirt and coal dust had damaged the tiny photo, but the image was unmistakable. The photo wasvery old and had been there for a long time.

Who was she? We wondered about this as we passed the photo around to each other.

Setting the photo aside, we carried the heavy oak mantel down to our work area in thebasement.

And there it sat for a long time.