How to fix old doors

Interior doors in old houses are supposed to open and shut just as nicely as their counterparts in newer houses -- that is, without having to push them hard, slam them or worse.

But in my experience, and probably in yours, most old-house doors don't work quite as they should.

More often than not, time has taken its toll on doors in the form of paint build-up, loose glue, loose hinges or other problems.

And all too often, previous owners have tried to solve problems with slap-dash repairs that didn't really solve anything. 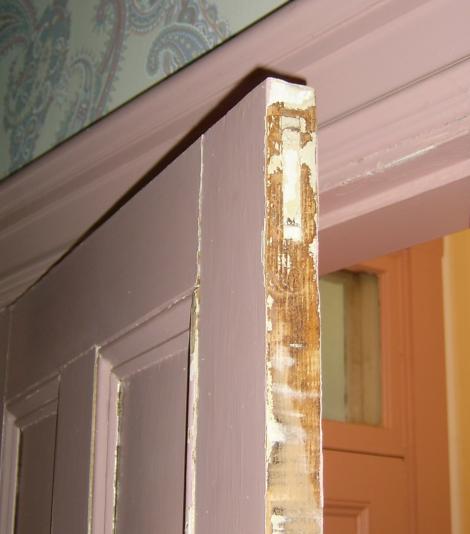 On this page I'll show you a couple of the most common reasons why old-house doors bind and stick -- and I'll offer tips on how to fix these problems.

Ideally, you will end up with a consistent 1/16 to 1/8 inch gap around the door between the door and the jamb. That's the amount you need for a door to open and shut properly.

Paint buildup is the most common cause of doors that won't shut cleanly.

The nice little gap between a door and its frame gets a bit narrower each time the door is painted. Eventually, with enough layers of paint, the gap disappears entirely.

Luckily this is an easy thing to fix. Just remove the built-up paint with a heat gun, a scraper, or chemical remover.

If you're using a scraper, take care not to gouge the edge of the door. And keep in mind that you need to remove paint in two places -- the edges of the door, plus the part of the door frame that the door closes into.

Open joints between a door's rails and stiles are another common problem. The cure is pretty straighforward.

Structurally, old doors are made out of stiles (these are the vertical boards in a door) plus rails (the horizonal boards) plus recessed panels.

Tenons jut out of the rails and into the stiles - forming the joints that hold doors together.

Sometimes tenons come straight through the door so that you can seem them when you look at the vertical edges of the door. These are known as through tenons.

Sometimes, especially on newer, machine-made doors, the tenons are invisible because they come only part of the way through the stiles. These are hidden tenons.

The tenons stay put (or, at least, they're supposed to stay put) through a combination of glue and either pegs or wedges. Over time, alas, the glue holding the tenons tends to wear out. And when this happens, gaps begin to open up between the door's stiles and rails.

These gaps may be quite visible when you look at the door. Or they may be hidden behind layers of paint, caulk or other things earlier owners stuffed into these gaps to hide them.

Either way, the effect of the gap is that the door is somewhat wider than when it was first hung. And that means it won't shut.

To fix these gaps, first determine if your door has through tenons or hidden tenons. For a through-tenon door:

To fix a door with hidden tenons:

Sometimes doors bind because their hinges are loose.

To learn if this is the case, open the door part way, and then jiggle the door toward and away from its hinges. If the hinges move, they're loose.

Tightening the screws may be the only fix needed but sometimes the screw holes are stripped. If that's the case, and the loose screws are on the part of the hinge that is attached to the door, you can use longer screws to re-secure the hinge to the door. Just make sure to use screws with heads that are small enough to fit flush with the hinges.