Our home is 40-years-old. I am installing two bath fans, approximately 8 ft. apart, in the attic. It's a straight 11-ft. run to the exterior wall. I was looking for some advice on whether they can be vented together with a Y connection and a single exhaust hood. Or should I run separate ducts and hoods for each of them? 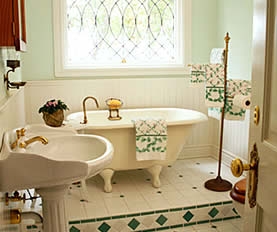 You could certainly install two separate fans and ducts -- one for each bathroom -- but your situation seems ideal for a single, remote fan. Standard fans combine a motor, grill and often a light in a box mounted in the ceiling. They are designed for a single air inlet and a single point of exhaust. In large bathrooms, or for separate but adjacent baths, you'd need more than one.

Remote fans can handle multiple pick-up points, either in the same bathroom or in completely separate bathrooms. They are made by several companies, including Fantech and American Aldes.

With a remote, in-line fan, you'd install a grill (or grills) in the ceiling of each bathroom, run ducts to the fan, and then carry the exhaust to a single hood on a sidewall or the roof of your house.

There's a real variety in the size and capacity of these fans so you shouldn't have any trouble finding one that fits your circumstances. A key consideration is how much air the fan can move -- that's measured in cubic feet per minute, or CFM. To help guide you, the ventilation industry has developed some handy rules of thumb.

In small bathrooms of less than 100 square feet, allow 1 CFM for every square foot of floor area with a 50 CFM minimum. In larger bathrooms, allow 50 CFM for each fixture (toilet and shower, for instance) plus 100 CFM for a whirlpool or jetted tub. One nice thing about a remote fan is that you could install two grills in a master bath and a single grill in a smaller bath and exhaust them all with a single fan motor.

In your case, add up the fan capacity you'll need for both bathrooms and size the fan accordingly. You'll have to assume that both bathrooms would need a running exhaust fan at the same time. If there's a down side, it's that the fan will pull air from all of the ducts connected to it even when only one bathroom is being used.

Insulate the ducts to prevent condensation

All that steamy air from your morning shower contains a lot of moisture. If you live in a cold climate and your attic is not insulated (what's called an "unconditioned space") that water vapor can condense on the inside of a cold metal duct.

For that reason, Fantech recommends an insulated, flexible duct. Make sure that any duct connections are well sealed (no, don't use duct tape).

The other issue is noise. Ceiling-mounted fans are rated for the noise (OK, sometimes rattles) they make in increments called sones. Cheap fans may be rated at 4 or more sones. But the industry makes very quiet fans, too, some rated at as little as one-third of a sone. It's not as clear-cut with remote fans. For some reason, the industry doesn't use the same rating system, so you won't find that convenient benchmark while you're shopping around. Remote fans can be noisier than ceiling-mounted units, another reason that Fantech suggests the insulated flex duct. It helps soak up some of the fan noise.

When sized and installed properly, your remote fan won't be intrusive. And you'll only need one of them.