Nothing to sneeze at: Indoor allergens

While most folks associate allergies with the great outdoors during hay fever season, the number of things inside houses that can provoke an allergic reaction is nothing to sneeze at.

"Many people feel their home is a haven, free from outdoor pollutants," says Phyllis Adams, associate professor of agricultural and extension education at Penn State's College of Agricultural Sciences. "However, the indoor environment can be filled with a variety of substances that can make us sick." 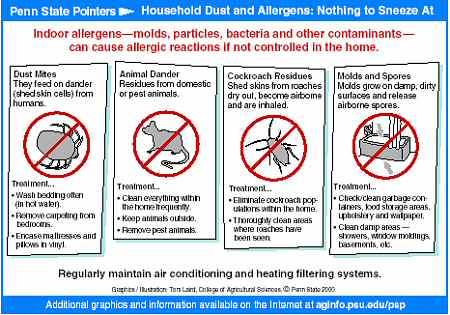 Allergic reactions within the home can be broken down into two broad categories: respiratory allergies and hypersensitivity pneumonitis, Adams explains.

Respiratory allergy symptoms are quite familiar to hay fever sufferers. Indeed, such maladies as runny nose, sinus stuffiness, post-nasal drip and watery, itchy eyes are caused by indoor allergens as well. In some cases, indoor allergens can induce asthma, causing shortness of breath and tightness in the chest.

Hypersensitivity pneumonitis is more difficult to diagnose because it mimics an acute case of pneumonia. Not long after breathing the allergen, the exposed person will get fever, chills and shortness of breath. Chest X-rays often indicate pneumonia, but repeated incidents can reveal to doctors that an allergic reaction might be at fault. This illness often afflicts people within specific occupations or who have specialized hobbies. Farmers can get the illness from inhaling moldy hay, and pigeon fanciers can get it from inhaling particles from bird droppings.

Adams points out that allergists can isolate very specific causes for many indoor allergies. All households contain dust, but very few homeowners know what is in dust. Dust is a highly complex mix of allergens that includes human and animal hair and dander, mites, molds, leftover food particles, bacteria, insect parts and decomposed material.

Adams describes some of the more common indoor allergens and how to control them:

Dust Mites: These are the major source of allergic reaction to household dust. They thrive on shed human skin and are most commonly found in bedrooms, where skin cells are abundant. Preventive measures include frequently laundering bed linens in hot water and removing carpets from the room. In some cases, homeowners might have to encase the bed mattress, box springs and pillows in vinyl covers.

Animal origin allergens: Skin scales shed from humans and animals, commonly called dander, are another major allergen. Dander from such animals as cats, dogs, horses and cows can infest a home even if the animal has never been inside. Rodent urine from mice, rats and guinea pigs is another allergen. Adams says these allergens can be controlled by diligent cleaning and by keeping animals out of the house.

Cockroach-derived allergens: Most of the allergens from cockroaches come from the insect's discarded skins. As the skins disintegrate over time, they become airborne and are inhaled. The solution to this allergen lies in eliminating the cockroach population, Adams says.

While a range of antigens can cause hypersensitivity pneumonitis, the most common is a group of microorganisms called thermophilic actinomycetes. These organisms decompose organic matter such as soil, manure, compost, grain and hay. Adams says actinomycetes commonly enter indoor environments through forced-air heating and cooling systems. Certain fungi can cause pneumonitis, as can proteins from bird droppings.