We are building a house in South Louisiana with a cathedral ceiling. The builder is suggesting we use 2x8 tongue-and-groove boards for both the ceiling and the roof deck. We plan to use cypress. The problem is insulation. We'd like to use a metal roof on top of 2x4s applied laterally, which would give us about 1 and a half in. for insulation. We'd thought about using a radiant barrier. Should we worry about condensation? 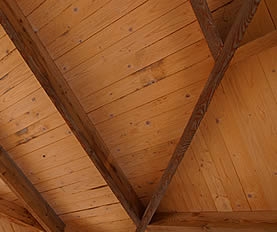 Using tongue-and-groove planks for both the roof deck and the finished ceiling makes sense. But the half in. of insulation in the roof doesn't.

Let's start with the roof deck. I don't know how expensive cypress is, but an option you might explore with your builder is using 1x8 boards instead of 2x8s. That would be cheaper and you'd get the same effect inside. To stiffen the roof assembly, the builder could add a layer of exterior plywood or oriented strand board. That would provide more resistance to racking than planks. You might want to finish the underside of the cypress before it's installed. There's nothing like cutting all those edges after the fact to drive someone around the bend.

In your part of the country, government guidelines suggest insulation with an R-value of 38 for a cathedral ceiling. You can always add more. But you shouldn't have less. Even if your contractor uses high density urethane foam in the roof, the R-value probably isn't going to be much higher than about 11. The insulating value of the roof deck itself isn't high, so you would be well under the recommended level.

This may be a great place to use structural insulated panels (called SIPs). They are sandwiches of oriented strand board and rigid foam insulation. They can be ordered in several thicknesses. A panel made with expanded polystyrene (EPS) foam 10 and a fourth in. thick would get you R-38.

You can look for a SIPs manufacturer or distributor at the web site of the Structural Insulated Panel Association (www.sips.org). There's actually a distributor in Baton Rouge. Alternately, you could look into a product called Nail Base made by Atlas Roofing (www.atlasroofing). It's a half-SIP, a layer of OSB bonded to polyisocyanurate insulation, and it's sold in several thicknesses. Polyiso has a higher R-value per inch than EPS. Adding this much insulation won't be inexpensive, but it's going to make your house a lot more comfortable and it will cut your cooling bills considerably.

Keep the sun and moisture out

Radiant barriers reflect some of the solar energy that's otherwise absorbed by the roof, and they're well suited to climates like yours. To be effective, the radiant layer must be adjacent to an air space. Atlas Roofing, in fact, makes an insulated panel called Cross Vent RB that combines a radiant barrier with an air space.

Also consider using a light-colored metal roof, which would reflect heat and help keep the inside of the house cooler during the summer. That alone can really cut energy bills. Finally, there is the question of condensation, a problem anytime warm, moist air runs into a cool surface. When the surface is below the dew point, moisture condenses into a liquid. And that can trigger a host of problems in a building, including mold and even structural decay.

But insulated roofing panels made with a closed-cell foam like polyiso should eliminate that potential. As a very modest science experiment, pick a good warm day to sit on your back porch with a very cold can of pop, one of those sultry summer days that Louisiana is famous for. The can will bead up with water in no time-that's condensation. Now slip the can into a foam sleeve. No condensation. That's more or less how a well designed roof assembly will protect your house, and keep you cool and comfortable at the same time.