My home is in a desert climate, Fresno, California. The house is about 36-years-old with R-19 insulation in the roof, but I suspect it's not as effective as it once was. I want to add 2x6s inside, fill those cavities with insulation, and then add drywall. My main concern is the air barrier I keep reading about. 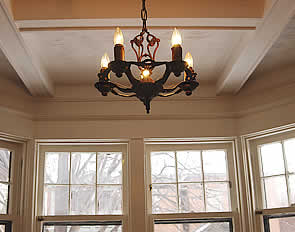 I'd put my efforts into getting enough insulation in the roof. With average July temperatures of 80 degrees or more and January's daytime highs often cracking 50, Fresno is a short-sleeves kind of place much of the year. Even so, roof insulation will keep you more comfortable and reduce your energy costs.

How much is enough? Begin by checking the Department of Energy's recommendations, available online at http://www.eere.energy.gov/. A map and chart lists suggested R-values for walls, roofs, cathedral ceilings and other parts of the house. Your roof should be insulated to R-38, and that really ought to be viewed as a minimum not a maximum. With energy prices rising as quickly as they have been, the more insulation the merrier.

From what you say, your roof is framed with 2x6s and insulated with fiberglass batts. That would have been standard practice when the house was built. It's not good enough today. You have a couple of options for improving that situation.

Another possibility is to tear out the existing ceiling and the fiberglass insulation and spray in high-density polyurethane foam. It's rated at roughly R-6 per inch, so it won't by itself get you the R-value you want. You'd have to add a layer of rigid foam insulation and then the drywall.

Foam forms a very effective air barrier because it completely fills roof or wall cavities. Spray-in foam is expensive, but you would not have to go to the trouble or expense of adding an entirely new layer of framing.

Something else to think about: fiberglass batt insulation is often installed carelessly. Even very small gaps between the insulation and the framing seriously reduce performance, to say nothing of all the critters that may have burrowed there over the years. So you may not be getting the full potential of that old R-19 insulation.

Don't worry too much about moisture

In cold climates, effective air barriers are extremely important. They prevent water vapor from condensing on cold roof and wall sheathing. That common defect can produce mold and lead to structural decay. It's a problem in reverse for hot, humid regions (think the Deep South) where central air conditioning runs all the time. Moisture-laden air from the outside can condense on the back side of interior walls.

Vapor barriers (more properly called "vapor diffusion retarders") can help. But they are hard to install well and researchers have discovered that air leaks carry much more moisture than vapor diffusion. That's why air barriers are key. In Fresno, however, it's hard to see why these problems would be much of a concern. Temperatures are relatively high and humidity levels low.

I'd look to increasing the amount of insulation. That will make the house more comfortable and cheaper to heat and cool. And if you suspect there's something wrong with the insulation you already have in the roof, all the more reason for a clean start. At least you'll know exactly what you have working for you and that the job gets done right.