We are planning work in both bathrooms of our 1962 house and considering exhaust fans, which we do not have now. My husband is concerned about the heating or air conditioning that will be lost along with the humidity when the fans are in use. How would you answer his concerns? 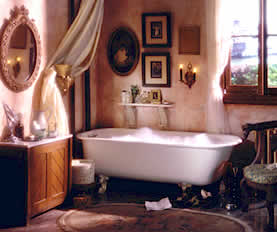 He's got a legitimate question. After all, why should we spend a lot of money heating or cooling air inside the house only to turn on a fan and get rid of it?

Mainly because it's a fair trade. You get more in return than you lose. And if you're really worried about the energy drain, there are some things you can do about it and still have your new fans.

The obvious reason that fans belong in bathrooms is to get rid of all the moisture you produce when you take a bath or shower. It's not just the foggy bathroom mirror you want to avoid. Moisture can encourage the growth of mold, not just where you can see it, but inside wall and ceiling cavities where you can't.

If your house dates from 1962, builders might not have thought to include a vapor barrier inside the walls. That means that water vapor can find its way to cold outside walls where it will condense back into a liquid. That can help mold grow.

A not so obvious reason to install fans is that they can help rid your house of chemical contaminants, dust and pollen and all the other stuff you don't want to breathe. Many everyday products contain potentially harmful compounds that collect in the air. Formaldehyde, for instance, can come from a variety of manufactured wood products like kitchen cabinets, shelving and even furniture.

Solvents, household cleaners, carpeting, and other objects most of us live with also can contribute odors, if not toxins, to the air. Back in the days when houses were drafty, and chemical compounds were fewer, it might not have been a big deal. Now it's something to keep in mind. In fact, ventilation engineers suggest interior air be changed about every three hours.

Make the least of it

There are ways to take the sting out of using a fan. First, buy fans that don't make a lot of noise. Your husband won't wince every time he hears one running. Noise is measured in "sones," and the lower the number the better. One sone or less would be ideal.

Invest in a programmable timer or a special switch that runs the fan only when it senses too much humidity. If you're really concerned about energy losses, call a heating, ventilating and air conditioning (HVAC) contractor and ask about a "heat recovery ventilator."

These devices use outgoing air to heat (or cool) incoming air. The air is gone, but you salvage a lot of its latent energy. HRVs are not cheap, but they are effective.

Ultimately you will have to give up at least some energy in return for cleaner air. But the minor losses will be far outweighed by the benefits. For you and your house. Just think of it as a cost of doing business.