It's true that shower and tub valves that pop through a tile surround can provide a path for moisture to get inside the walls. So your question is a good one.

I called the Ceramic Tile Education Foundation for an answer and was told that yes, it's a good idea to caulk any voids around shower valves to make sure no water gets into the wall.

By the time you set tile, you've already installed two layers of material over the wall framing. The first is tarpaper, which is stapled to wall studs as a moisture barrier. After that, cement board is nailed or screwed to the wall as the substrate for the tile. 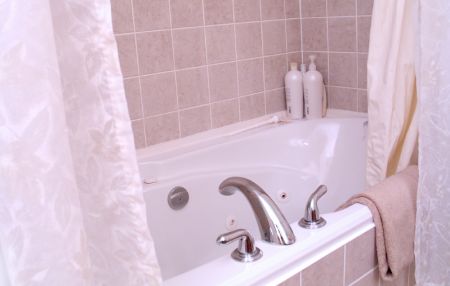 At each of these steps, valves must be allowed to emerge. If you're an especially sloppy worker, the holes around the valves might be a lot bigger than they have to be. Even if you're careful, some gaps are inevitable.

Once you're done tiling and grouting, the plumber (or in this case, you) returns to install the showerhead and trim pieces. That's the time to caulk the seams between the valve stem(s) and the tile.

The caulked joint will be covered by the trim.

Many acrylic latex caulks are rated for exterior use and they'll probably be fine for sealing plumbing penetrations in a tub surround. But the Education Foundation told me that silicone caulk is the best bet in a shower, where there's usually a lot of water splashing against the walls. Same goes for a tub where you give your little terrors their nightly baths.

Most caulks aren't designed to fill very large voids. But if you've done a careful job of fitting the tile to the valve that shouldn't be a problem.

But there's a potential the putty could stain certain kinds of tile. So stick with the caulk.

Risk of leak not that high, unless....

In reality, the risk of a leak probably isn't very high.

Even in a shower, most of the water is directed at the bather rather than the walls. There is splashing, to be sure, but unless you're directing a powerful stream of water at the valves, the amount of water going where it doesn't belong is going to be incidental.

I'd be a little more concerned in an over-sized shower with two shower heads. In that case, a certain amount of water may be landing directly on a shower valve.

I'd be even more concerned if I had what's called a "high performance shower," which may sprout a half-dozen or more individual showerheads. These things can pump 10 times the amount of water as a normal shower head (which is a good reason not to own one).

By the way, the Education Foundation (www.tileschool.org) runs a number of training programs for consumers as well as those in the trades. You can also check with the Tile Council of North America (www.tileusa.com) whose Web site includes a good list of answers to frequently asked questions.