Loss of a significant building site

The house had been vacant for over ten years and, although the garden's architecturalfeatures were deteriorated and the planted areas were severely overgrown, much of thehistoric landscape remained. For example, there were terraces at the front and rear of thebuilding. 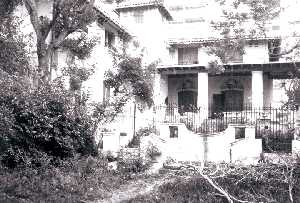 In preparation for a project that involved re-development of the site for low-riseapartments, the surviving landscape features--both plant materials and architecturalelements--were destroyed.

The proposed rehabilitation of the house for rental apartments had been consideredexemplary; however, because the demolished walled garden was one of only a few formallydesigned gardens in the city that had survived to the present day, the work did not meetStandard 2. The fact that the garden had been neglected and was overgrown at the time ofrehabilitation did not lessen its historical significance. 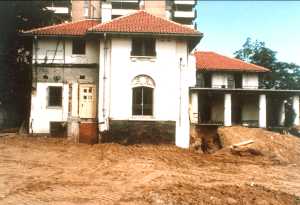 After some work, the house lacksits historical landscaping.

The landscape and landscape features around a historic building are oftenimportant aspects of its character or that of the historic district in which it islocated. Owners always need to be aware of the historical significance of all elements ofa property and its site before making decisions about destroying or altering historicmaterial.