New Support for an Old Floor

My father built a cabin about 40 years ago. He has since passed away and I'm trying to solve a problem there. The floor upstairs is made from particleboard and seems to be weak or spongy when I walk on it. He put the floor down, and then he added the walls to separate three rooms. Dad didn't have a lot of money so he did things cheap and his way. Do I need to have the entire floor cut out and then replaced? 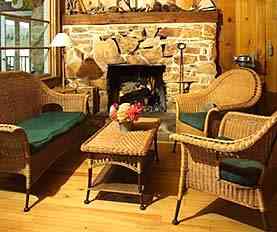 I'm sorry about your father. The cabin must be a special place, and you should be able to rescue the floor without tearing anything out. In fact, you'll probably be adding material to what's already there.

Many an old house (and cabin) was put together with floor framing that wasn't quite stiff enough. Strength and flexibility are two different things -- a bouncy floor may be irritating or unnerving but still up to the job structurally. But if you want to take out the bounce, start on the first floor.

Adding new framing from below

Your job will be a great deal easier if there is no finished ceiling on the first floor and you have a clear view (and access to) the flooring above. Start by looking for cracked beams, split floor joists, punky wood and signs of insect infestation. Wood that has deteriorated from exposure to water or bugs generally should come out and be replaced with new material. In the case of a major beam that can't be removed, repairs can sometimes be made with epoxy fillers.

But let's assume for now that the floor joists (the framing that supports the floor) are simply undersized. One approach is to add a column or even a short, framed wall to support the framing roughly half-way across its span. If you can, the load from above should be carried all the way to a solid footing.

You also can add new material to one or both sides of the existing joists, which is called "sistering." Choose lumber that's the same width as what's already there, and use a combination of construction adhesive and bolts or lag screws to attach it to the under-sized joists. Where joists intersect beams at the perimeter of the room, you can use metal joist hangers for support. Those are available at just about any store that carries building supplies. This approach isn't going to do much for the charm of an old cabin, but the repairs could be disguised with a simple finished ceiling on the first floor.

Carry the weight from above

We once owned an old house with an attached barn where an enterprising carpenter had found a way to support a major beam from above rather than below. This involved drilling a hole down through the beam at mid-span, inserting a length of threaded rod and putting a washer and nut on the bottom where it popped through the beam. The top of the rod went through the ridge and was attached in the same way.

Once everything was tightened up, part of the weight from the floor was distributed throughout the roof structure. Of course if the roof on your cabin is structurally lacking, this isn't going to work. You'd need stout rafters and ridge.

If the flooring upstairs is rotten, take it out

If the floor upstairs is truly spongy because of water damage, you should cut out the bad spots and splice in new pieces. While particleboard makes good floor underlayment, it does not take kindly to water. But unless the damage is widespread, you should be able to reinforce the floor without removing it.

If you're not sure how to proceed, or you're concerned that the floor is teetering on the edge of collapse, don't take any chances. It just isn't worth it. Ask a carpenter you trust to take a look and offer suggestions for repairs.