Having read your recommendations for painting cast iron radiators, I'm wondering if we should feel confident using the same procedure to paint the old exposed steel radiator pipes in our New York City apartment. Assuming the temperature of these pipes doesn't exceed 200 degrees, can we use regular oil based paint over an oil based primer that contains a lot of zinc, rather than resorting to heat resistant paints?

High-temperature paint, which comes in more colors than I would have guessed, can handle continuous heat of 1,000 degrees F. or more. It's probably just what you need if you're touching up a wood stove or the exhaust manifold on your '62 Malibu, but obviously overkill here. 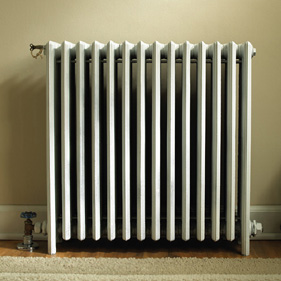 The question is whether ordinary paint can withstand temperatures that could approach, theoretically at least, 200 degrees. The answer? It depends on whom you ask. According to Sherwin-Williams, the answer is yes. The company recommends its Alkyd All Surface Enamel, an oil-based coating that can be used on a variety of surfaces including steel and galvanized steel. Other paint manufacturers are not as definitive.

Stay away from latex paints. Acrylic latex paints have stolen the show in the last decade. But when it comes to radiator pipes, it's apparently not the best choice. Steve Revnew, Sherwin-Williams' director of marketing and product development, says latex paint would soften and become tacky.

Enamels are hard-film paints. Even when tested to 200 degrees, the Sherwin Williams brand didn't have that problem, according to the company. Over time, heat breaks the paint down, just as sunlight does, but it's a gradual process.

Pittsburgh Paints also discourages the use of latex and recommends its aluminum paint, which has an in-service temperature rating of 450 degrees, rather than its alkyd enamel.

I'd feel comfortable, however, using alkyd enamel with a recommendation from the manufacturer, like Sherwin-Williams, that says it can take the heat.

When it comes to a primer, there's no real need to look for one that contains a lot of zinc. That would be more typical as a rust preventive on structural steel--not really a concern here. An ordinary enamel primer would be fine.

Be cautious with paint prep. If the pipes in your apartment are bare metal, paint prep should be straightforward. You want to remove any corrosion or scale and clean the surface before applying primer.

However, if the pipes are already painted, be careful. The U.S. didn't ban lead in paint until 1978, so it's entirely possible that your pipes contain this toxic heavy metal.

Buy a lead test kit and if the test is positive, take measures to deal with this problem appropriately. That may require the services of a lead abatement professional, but start by doing some background reading at the U.S. Environmental Protection Agency Website (www.epa.gov/lead).

Finally there is the question of when to paint those pipes, and I'd vote for waiting until the heating season is over. Oil-based paints have relatively low flash points, a potential fire hazard, to say nothing of the odor. Wait until spring, when you won't be using the radiator for an extended period of time and when you can open the windows to air out your apartment.