We are renovating a late 1800s farmhouse and we've decided to leave a portion of the ceiling exposed. It was previously covered with lath and horsehair plaster so the beams and bottoms of the upstairs floorboards have never been finished. We believe the floorboards might be chestnut. Any suggestions on how to clean and finish the ceiling without losing the patina? 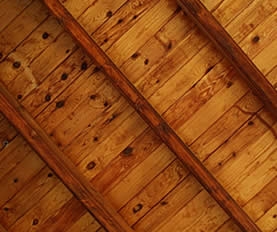 This is where modern sensibilities collide with history. Whoever built the house never intended for the bottoms of those floorboards to be seen. Once the surface was safely hidden behind a finished plaster ceiling, it would be impossible to tell what they looked like. Until, that is, your renovation intervened.

Planks were probably nailed down shortly after they arrived from the sawmill. A series of broad arcs across the face of the boards may still be visible, marking the passage of the blade as it sliced through the log.

If the surface is rougher than you'd like, it's also part of the history of your house. It's certainly possible to dress up the appearance of the floorboards, but not without losing something in the process. Sanding the surface would make the boards smooth, but the finished look would be unnatural. You can also expect quite a workout from holding a sander overhead for any length of time.

You might try scraping the surface gently with a cabinet scraper (a thin, rectangular piece of steel) to remove some of the loose wood fibers. That would also make the ceiling less of a dust collector.

However, I'd be very cautious about doing anything to the surface that would dramatically alter its appearance. Better to start gently. A stiff brush (not a wire brush), with the help of a vacuum or better yet an air compressor would remove loose dirt and wood fibers without doing any damage. It's a good idea to wear a dust mask while you're doing this. You don't want to inhale dust that could be laden with droppings from critters that have occupied that space over the years.

You can always try a finish or paint

A clear finish would make the ceiling less likely to shed dust and easier to keep clean, but you run the risk of a really awful result-a shiny surface that looks completely out of place. If you can find a scrap of this flooring around the house, you might experiment with a flat, clear finish that soaks into the wood. But I wouldn't count on getting something that harmonizes with the room.

A more extreme approach would be to whitewash the entire ceiling-beams, planks and all. The wood would still be rough, but the stains, discolorations, and old plaster residue would just go away. You can find recipes for old-fashioned whitewash on the Web and using it would be less of an historical stretch.

Look through some shelter magazines at your local bookstore and you're likely to come across photographs showing rooms in old houses that have been finished this way. They can be charming: brighter and cleaner than the original but still obviously old and lived in.

Enjoy the view you have

In the end, restraint may serve you best. Part of the wonder of owning an old house is coming to know its creaks and groans, its sloping floors, its worn finishes and odd repairs. They speak not only of all the stewards who have come before you but the hardy souls who built the house in the first place.

If your floor is indeed chestnut, consider yourself lucky. It was an important part of the great hardwood forests of the East until a blight thought to originate in China wiped it out early in the 20th century. It, too, is now history.