My home was constructed in the late '70s and all of the windows are casements. The trim and sections of the frames are suffering from severe dry rot because of improper flashing. They are single pane with a removable inside pane -- certainly not insulated glass. Some of the frames are warped. I'm considering replacing them with low-e double-hung windows. Should I be aware of any specifics in regards to the framing? Do you think any parts of the casements might be salvageable? 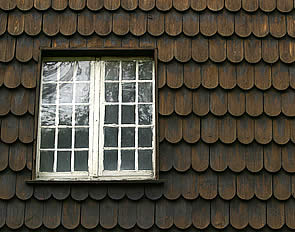 A friend of mine who owns a very old house in rural Connecticut spent a winter restoring a stack of original window sash, a huge amount of work.

The time was well spent.

With the windows re-installed, the house looks just as it might have 150 years ago.

But when the house was built in the 1970s, and the windows show signs of decay, I don't think there's any reason to keep them.

Tear out and start fresh. It's possible to replace just the sash if the window frames are otherwise in good condition. This is a less invasive repair.

But decay in the frames suggests they should come out, even if you weren't going to switch from casement to double-hung windows. Water is a relentless enemy of houses. It's a good bet that for all the rot you can see you'll find hidden damage once you remove the old windows.

The most reliable repair is to strip off interior and exterior casing, remove the window frames, and take a careful look at the sheathing and framing around the window openings.

Epoxy fillers can sometimes be used to solidify and strengthen damaged wood, but because historical significance really isn't a factor here it's probably better to cut out rotten wood and replace it with new material.

Rough openings (the openings created in the rough framing for the windows) will vary. You should pick out your windows before reframing the openings so you know exactly how big to make them.

Windows are better than ever. You'll find that windows available today are head and shoulders above what was available in the 1970s. Double-glazed windows with low-e coatings and filled with an inert gas like krypton or argon will make a big difference in comfort and energy use.

Windows have more insulating value, described as a "U-value," and also are rated for solar gain, air leakage, and condensation resistance. You might start by visiting the web site of the National Fenestration Rating Council (nfrc.org) for an explanation of how to read the labels that manufacturers stick to new windows.

Self-adhering bituminous flashing and other building materials that are readily available today will make leaks much less likely when you put your new windows in.

Replacing windows isn't cheap, but new windows will look better, operate easier, and cut your heating and cooling bills. As for salvaging parts from your old windows, I admire your thrift. Some of them (or at least the sash) might be useful if you're building a shed. Other than that, they're probably not worth the trouble.