Our Victorian home was supposedly built in the 1880s. The previous owner installed new replacement windows. Would the original windows have had wavy glass? 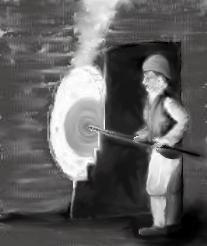 I'm sorry to hear of your loss.

The glassblower, viewed more as an artist in recent times, was an essential craftsman who produced fundamental products. The process of blowing molten glass into a balloon-like shape was the first step in creating window glass.

The crown glass method involved the glass blower creating a sphere. This sphere was then attached to a solid rod and the blowpipe removed. The opening left by the blowpipe was then enlarged as the sphere was continually spun, eventually forming a small disk. This disk was then spun again inside a large opening in the furnace until it became very thin and with a rather large circumference.

The thin disk was cut into several individual square or rectangular panes that fit into a window sash. The individual panes in a sash were called lights. Many eighteenth- and early-nineteenth-century windows have six or nine lights in each sash.

The middle of the disk, which was attached to the spinning rod, could not be used for an unobstructed window pane. Rather than returning this wasted piece to its molten form, it was occasionally used for windows that didn't offer a view. This "bull's eye" glass was often found in transom windows over solid doors to allow daylight into entrance halls. 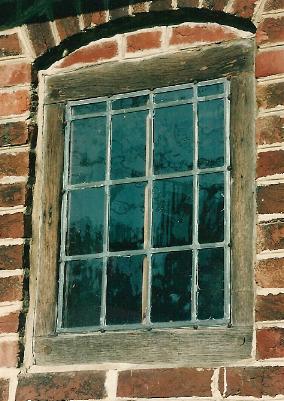 Cylinder glass, also created by the skilled glassblower, began in the shape of large jar. The ends were removed and the remaining cylinder was then cut down the side. The split cylinder would be heated and unrolled into a flat sheet.

Both crown glass and cylinder glass were manufactured throughout the first three centuries of house building in this country. Until the midnineteenth century it seems that crown glass was preferred. By the latter part of the 1800s, improvements in the cylinder method of production made it the most common form of window glass. One improvement resulted in the ability to create much larger individual panes. Two-over-two windows become the dominant style by the late-Victorian era. 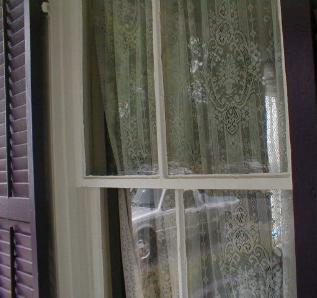 Crown glass, having been spun while molten, often has a repeating pattern of curved imperfections in the panes of glass. Cylinder glass usually has distortion without a pattern, but both are found to have occasional small bubbles trapped in the glass -- a natural byproduct of the glassblowing process.

I've never had the pleasure of living with the original wavy glass still present, but I do occasionally get to look through other buildings' handmade glass, but it's rare and certainly not every pane in every window. Understandable, considering it's the most fragile part of a house. The character of old windows is also often disregarded when improvements are made in an attempt to reduce maintenance and increase efficiency.